Under the water is where Bow van der Weijde belongs

“That’s where I got my PADI certificate, where it all started for me. I’d been on a four-month trip across Asia and wasn’t really sure what I wanted to do next."

“I’d enrolled on various courses (including degrees in economics and engineering) after school, but soon realised I was more of a practical person, even though I was capable of the theoretical stuff, and went off exploring to find my niche.”

Growing up, Bow lived on the coast of the Netherlands, where his family had a restaurant. “My family was always busy with the restaurant. We didn’t have a boat or anything. Whether consciously or subconsciously, the beach was always there, the waves rising and falling in the background.”

After travelling across Asia for four months, Bow was introduced to a freelance diver by his father. “The guy was freelancing for Trident and convinced me to do a diving course in South Africa,” says Bow. “It took three months, but seven years on and I’m still diving, now as a commercial diver.”

“South Africa was great, diving almost every day. The Dutch diving certificate requires more bottom time than the rest of the world, so I had to do more than most, but it was 30 degrees every day and lasted 11 weeks. Norway is where a lot of divers do the course nowadays, but the water is obviously a lot colder, and it can take up to four months.

The sea swimming he did leading up to the course came in handy for the swimming entrance exam. “I used to do a lot of sports, football and swimming. But since working as a commercial diver, I’ve not done as much."

The job itself keeps you really physically fit and active: the kit is heavy; the helmet weighs 15kilos; the jacket, 15kilos; and the diving suit, 5kilos. You also have to drag your diving umbilical that is attached to you for air, communication, video and of course tools with you. 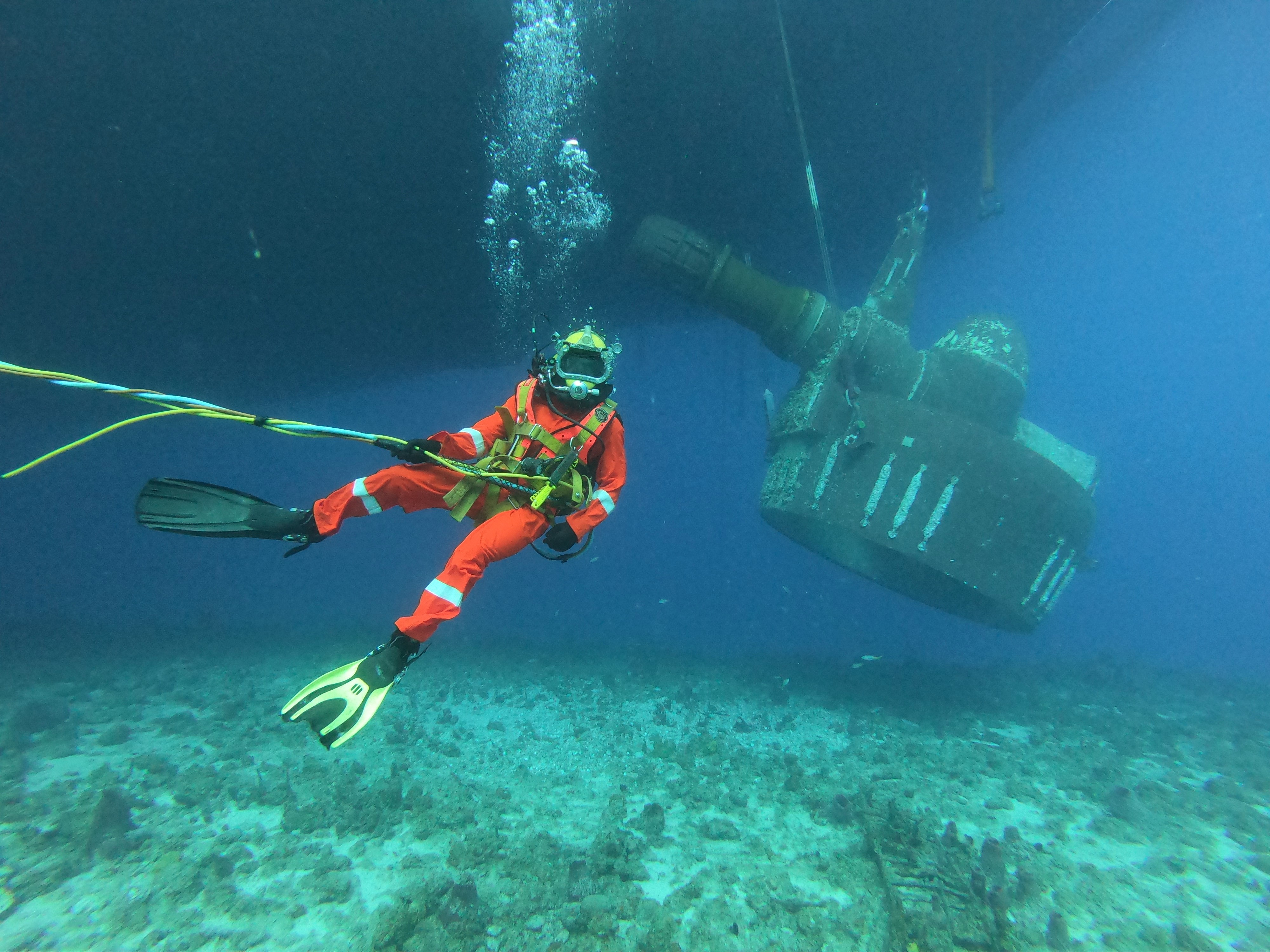 “On a job in Le Havre, France, I had to climb up an 8-10 metre ladder from the sea. You have to be pretty fit just to come out of the water – that’s actually the hardest bit of diving: just coming out of the water. And standing by the quayside waiting to go in,” says Bow, laughing.

As well as requiring physical strength and brute power, commercial diving demands a high level of concentration. Coming up from the sea too quickly can give rise to a whole host of problems, such as decompression sickness or the accumulation of gas bubbles in the bloodstream, often caused by a rushed ascent.

Then there’s the likelihood of developing arterial gas embolism – restricted blood supply to the organs as a result of nitrogen bubbles blocking the arterial circulation. Nitrogen narcosis, a condition affecting motor-coordination, is another. Divers get that when they go down to unhealthy depths on regular air, typically below the recommended 50 metres.

Confirming the fears of many (myself included), “The accumulation of air in your lungs without breathing out, can cause you to have a collapsed lung. If the nitrogen bubbles block the bloodstream to your brain, it can be fatal.” However, each diver is trained to a high level and carries the right equipment to avoid these rare situations."

“The deepest we can go in Wärtsilä is 50 meters, that’s the maximum of our air diving certificates. If you go to depths like that, you could get nitrogen toxicity it feels like you’re drunk. On a recent job, we did around 25 metres on nitrox which has less nitrogen and more oxygen."

I’m always careful underwater. You only get one body, right? I don’t worry too much. You just have to keep thinking. I always come up slowly and carefully. The guys here are very careful as well. We’re all quite young and try to be careful with our bodies

“The first course in South Africa was about learning how to scuba dive properly, how to breathe correctly and how to control buoyancy. After the first four weeks, you get your scuba certificate and can work with the fire brigade and in aquariums."

“Then you learn how to dive with surface supplied air-fed helmets and you can start speaking to other divers and supervisors. It’s so different. And you learn what to do in emergency situations, like if you run out of air."

“A diver always has three air supplies: the main supply, the secondary supply and the bail-out. When the pressure gets below something like 6 bars, an alarm prompts the supervisor to step in."

“Some jobs require the diver to come up and down quite a lot which is called yoyo diving. It’s not very healthy for you, but you just have to be careful and go slow. Going down is not a problem, it’s coming up."

Now in a more senior role, Bow spends a little more time in the office than he’s used to. Yet, travel remains a major part of his every day. Around office work and helping out in the workshop, he travels all over the world, wherever the next job takes him. 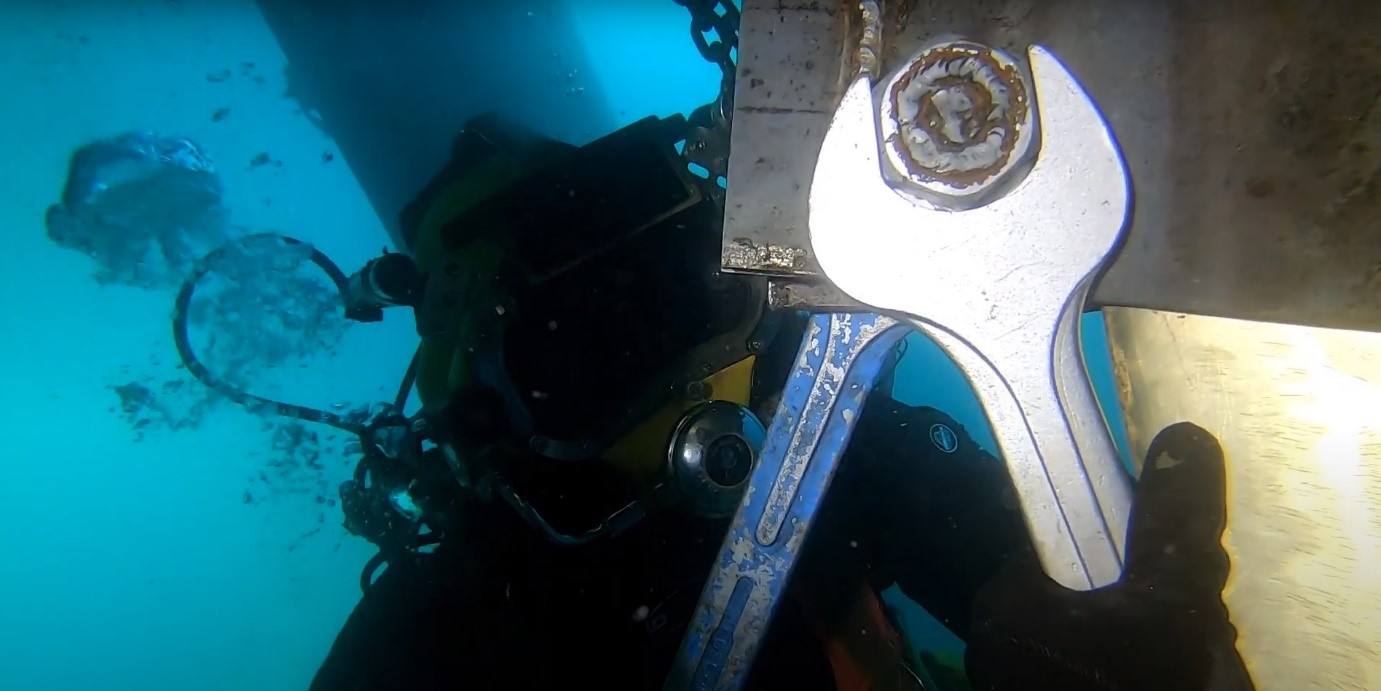 “When you start, it’s diving, diving, diving. But as a supervisor/superintendent, you have other responsibilities, like preparing projects and writing procedures. It’s nice to do a little bit of everything, but after two to three days in the office, I start getting itchy feet."

In a foreign country and under the water is where Bow belongs. “Unless it’s in Rotterdam in the depths of winter,” says Bow, laughing.

Adaptability is key for being a commercial diver. Often, Bow’s job requires him to work unsociable hours, one example being in Curacao, the Caribbean, where he worked 3 weeks straight through the night.

“After the night shift, we enjoyed some sunshine and beers at eight in the morning. We’re just living the other way round.”

“On a job in New Zealand, the ship’s crew wasn’t really prepared for 12 guys, so our rooms were right next to the engine of the thruster. My phone kept dropping off the nightstand while mooring the vessel and the whole room was shaking – you didn’t need an alarm for that one,” says Bow.

A disrupted sleeping pattern, however, is not enough to dampen Bow’s enthusiasm. “In Namibia, we were sleeping on the platform. It was a truly memorable experience. There were sea lions swimming around us while working; they were quite confident and wanted to play, but they are obviously way quicker. It was unbelievable watching them move."

“After a job in Tahiti, I managed to fit in some recreational diving with a colleague and swam with sharks and whales.”

For Bow, the acquisition transition from Trident to Wӓrtsilӓ has been positive. “We have some really nice jobs with Wӓrtsilӓ. We’re combining the knowledge of Trident and the knowledge of Wӓrtsilӓ and expanding what we can do, above and below the water."

“We also have the dry habitats. For the Curacao job, which required removing two complete thrusters and overhauling the remaining five, we fixated a flexible habitat system inside the thruster tunnel to create a ‘dry’ underwater working environment. It’s revolutionary and has completely transformed our ways of working.”

Although I doubt Bow could be kept out of the water for long.