Along the coast of Norway, science-fiction meets reality as Wärtsilä tests its new auto-docking solution for ships. See why this has the potential to revolutionise the marine industry.

When Captain Espen Haukanes is at the helm of the Folgefonn ro-ro and passenger ferry in the stormy waters off the Norwegian coastline, he doesn’t grab a large Macrame-knotted wheel to perform a tricky manoeuvre. Instead, he quietly clicks a mouse cursor over the word “sail” and the ship drops its moorings in one port, sails, and moors again in a new port. All of this, automatically. The coffee, however, he has to fetch himself.

This may be a small gesture for a crusty sea captain but it represents a giant leap for merchant shipping as Wärtsilä prepares to commercially launch its new system for autonomous dock-to-dock operations. It will also play a key role in Wärtsilä’s smart marine ecosystem which is being rolled out throughout the group.

Ushering in the future

The Folgefonn is operated by the Norled company between three ports in southern Norway on the Jektevik-Hodnanes route with 75 cars and 300 passengers. Norled operates 45 ferries across Norway. The Wärtsilä and Norled auto-docking project is supported, in part, by a grant from the Norwegian state-owned Innovasjon Norge (Innovation Norway).

“Everyone is talking about self-driving cars but it is coming to shipping too,” says Dagfinn Botnen, General Manager, Power Conversion, Wärtsilä Marine Business who pitched the idea to Innovation Norway.

Over the past three years, the Folgefonn has been retrofitted with hybrid propulsion along with a wireless shore connection capable of fully electric operations. It features numerous Wärtsilä innovations including its wireless inductive battery charging solution and energy storage systems. The Folgefonn also uses vacuum docking technology in which suction keeps the vessel at the dock, eliminating the need for ropes or lines.

The autonomous controller is based on Wärtsilä’s existing dynamic positioning system and is capable of controlling the vessel’s speed and position on the pre-defined track.

Fully automatic docking and sailing operations were tested twice, once in January and again in November of 2018 in the presence of the Norwegian Maritime Authority. While the first test was an auto docking exercise, the second was to test the dock-to-dock capability with the autonomous operation being used uninterrupted for the entire route, visiting three ports serviced by the ship.

Both these tests were passed with flying colours.

“We were on site for three days as witnesses to these tests; the first full-scale demonstration towards an autonomous operation of a vessel that we have seen. It was, to say the least, very impressive,” says Project Manager Nils Haktor Bua from the Norwegian Maritime Authority.

“There is no doubt that such technology can eventually increase the safety and overall efficiency of the docking and undocking operations for ships. I am impressed by how stable the system already is at this stage,” he adds.

A third and final five-day acceptance test has been scheduled for the spring of 2019.

“It looks like we will be given the green light by the authorities,” says Ingve Sørfonn, Senior Technical Officer, Electrical & Automation at Wärtsilä Marine. “We see no major obstacles ahead.”

According to the stakeholders, the main thrust (pun intended!) of auto-docking is not to save on the costs of man-hours but is instead intended to move the marine industry towards a new era of super-high efficiency, safety, and last, but not the least, environmental sustainability through reduced emissions.

Towards safer and more efficient shipping

“The Folgefonn and any future installations on other ships will still need a crew to oversee the automatic operations. Auto-docking is more about performing even, stable and economical operations, even in the worst of conditions by minimising the risk factors,” explains Sørfonn.

“The captain is still in the driver’s seat so to speak but with auto-docking, factors such as wind speed, weight, pitch, roll, depth are automatically ascertained to figure out the best possible approach into a harbour, and do it automatically.”

The vessel’s navigation is controlled via a series of tracks and waypoints, which guide the ship to the next destination. The autonomous controller controls the vessel’s speed, position on the predefined track, and the heading.

One of the biggest challenges and requirements of testing the new Wärtsilä auto-docking system on the Folgefonn was for the ship to be able to keep to a strict time schedule on its routes. Anyone who has ever visited Scandinavia knows how much punctuality is prized here, and the Norwegian transportation authorities have been known to penalise operators who don’t keep to their timetables.

“We had to prove that we could keep the same timetable and run on time,” says Sørfonn. 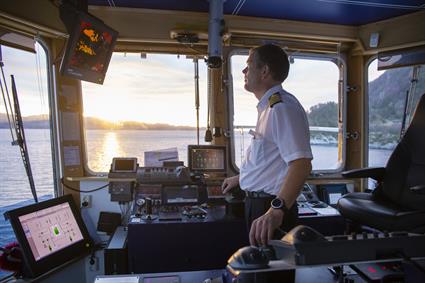