Is there a way for humanity to develop sustainably? Former US Vice President, Nobel Laureate and Environmental activist Al Gore was in Helsinki recently and spoke ardently about how this could be possible. Read on to know more.

Is there a way for humanity to develop sustainably? Former US Vice President, Nobel Laureate and Environmental activist Al Gore was in Helsinki recently and spoke ardently about how this could be possible. Read on to know more.

Must We Change? Can We Change? Will We Change? These were the questions climate warrior Al Gore posed to attendees at the Crisis Management Institute’s ‘Our Planet in Crisis and the Sustainability Revolution’ dinner held in Helsinki, Finland recently.

On the surface, it may have seemed an entertaining speech peppered with Trump jokes and self-deprecating anecdotes, however, Gore’s words carried with them an inconvenient truth. That the effects of climate change are real and indisputable. And he was in town on a recruitment drive to prevent it from being irreversible. “It’s all hands on deck. Time is running short,” he said.

However, the audience was cautioned against feeling too depressed, because the second question ‘Can We Change?’ brought with it optimism and hope. “After the final no there is a yes, and on that yes the future of the world depends,” he said quoting American poet Wallace Stevens. To effect this change, he said that we must urgently divest from fossil fuels, and swiftly adopt alternative energy sources and Electric Vehicles (EVs) which, as technology advances, Morgan Stanley says will reach cost parity with Internal-Combustion Engine Vehicles (ICE) by 2025. A similar trend is already visible in the energy sector where renewable energy is attaining cost parity and is steadily scoring over conventional energy generation.

Keeping in mind the fact that some of the movers and shakers of Europe were in the room, Gore emphasised to his captivated audience that climate change is the number one threat to the global economy and that it has reached an inflection point. He urged the audience to start demanding a better world and committing to not work with any companies that aren’t committed to climate protection.

One way to do this is to utilise Environmental, Social and Governance (ESG) criteria when it comes to investing in companies. It is an approach that will help determine a company's impact on climate change and conservation efforts among others. The crux of the matter, according to him, was that we should no longer steal from the future to fix the present. That is not the sustainable way.

This is a call that rings true with Wärtsilä as the company’s purpose is to enable sustainable societies through the use of smart technology.

Climate change is already exacerbating conflicts around the world as evidenced in Yemen and Gore stressed that addressing the linkage between climate change and conflicts should be a top priority. This is why conflict resolution organisations like the Crisis Management Initiative (CMI) can play a huge role in solving the climate crisis. 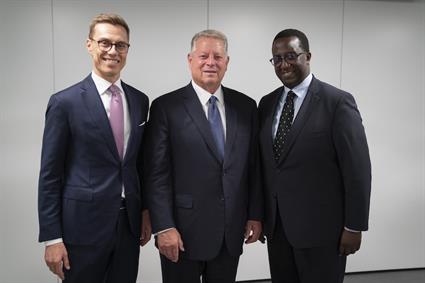 CMI is an independent Finnish organisation that works to prevent and resolve violent conflicts through informal dialogue and mediation. It was founded by Nobel laureate and former President of Finland Martti Ahtisaari in 2000. Since then, the organisation has grown to become one of the leaders in its field and Wärtsilä is a long-term key partner and active supporter of the organisation.