If only oceans could speak, they would say there is a need for any and every step that could positively reduce marine pollution. Scripted by the unwavering support from the European Union, this is a story about a mammoth mission that aims at cleaner, greener and more efficient ecosystem of marine engines through collaboration. It has the world watching.

If only oceans could speak, they would say there is a need for any and every step that could positively reduce marine pollution. Scripted by the unwavering support from the European Union, this is a story about a mammoth mission that aims at cleaner, greener and more efficient ecosystem of marine engines through collaboration. It has the world watching.

While the awareness against marine pollution is on the rise today, back in 2004 two global leaders in marine engineering, Wärtsilä Corporation and MAN Diesel & Turbo, had already embarked on a partnership to address the challenges of the future. Right from the start, their vision was shared by the European Union that co-funded the project that is now reckoned as one of the more concrete actions taken towards marine environment conservation.

Known to the world as HERCULES (Higher Efficiency, Reduced Emissions, Increased Reliability and Lifetime, Engine for Ships), the programme has awakened a renewed hope of zero emissions and environmentally sustainable shipping.

The partnership’s mission was to develop a technological breakthrough in reduction of fuel consumption and emissions for the next generation marine diesel engines, thus radically improving the environmental effect of waterborne transport.

“At the heart of this programme is unprecedented human collaboration,” says Sebastiaan Bleuanus, Wärtsilä’s Programme Manager for Research & Technology Development, adding that the project has successfully sailed through many challenges in past thirteen years, thanks to the rock solid support from the European Union. 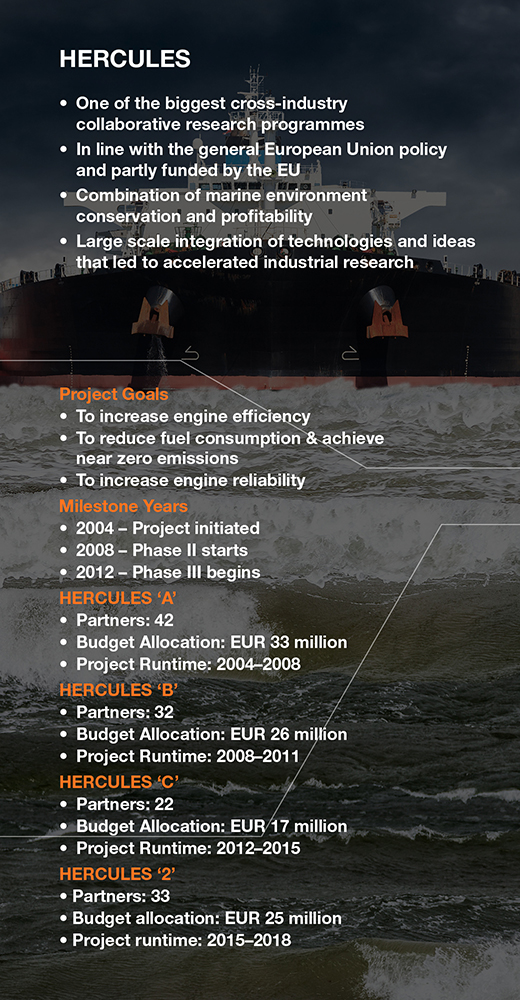 The story so far

As they say, a job well started is half done. HERCULES-A that began in 2004, after two years of rigorous groundwork, set a new benchmark for cooperation in marine engine technology and exhaust emissions. “With 42 partners and a budget allocation of EUR 33 million, this phase witnessed many technologies being investigated, each one designed to meet the objectives set forth,” points out Bleuanus.

In line with the EU policy, the project’s second phase made significant progress in the development of technologies designed to clean up diesel engines used on ships. The research mainly focused on achieving near zero carbon emissions. Essentially, this phase seamlessly combined two, often, warring goals – environment conservation and profitability.

Up next was HERCULES-C, a stage that broadened the research to integrate technologies from previous phases in all important areas of marine diesel engine development. Supported by the EU within Framework Programme 7 with 22 participant organizations and a EUR 17 million budget, this phase used the previous researches as building blocks to eventually achieve the outcomes that make a difference.

Considering the project’s primary objective of cutting fuel consumption of marine engines to further reduce carbon dioxide (CO2) emissions, its outcomes were a tell-tale sign of progress that is marked by pushing boundaries of engine developments to increase efficiency and finding newer ways for safe and sustainable energy production.

Sample this - a reduction of 1% from low temperature combustion and dual-fuel-engine optimisations each, 2% from combustion optimisation, another 1.5% from advanced plant control and from pressure based cylinder-individual control and health monitoring technologies, were all achieved within the project. And these are just a few of the bricks building towards the foundation of lowest fuel consumption that the programme has delivered.

The impressive results in-turn led to more reductions in exhaust emissions which were targeted at an ambitious 80%, which would mean near-zero levels. Bleuanus acknowledges the fact that the best technologies developed in the preceding projects (HERCULES A & B) were combined and integrated to achieve these lofty targets. While the reductions for particulate matter and total hydrocarbon touched 50%, the project managed to clock as much as 80% reduction for nitrogen oxide (NOx).

Looking beyond the numbers

While some achievements could be quantified, there were others like cracking new combustion concepts and fuel spray experiments that were measured more qualitatively. Throughout the project timeline, significant contributions were achieved in new turbocharger technologies: sensors, monitoring, adaptive control and tribological optimisation (i.e. friction and lubrication).

The project has thus dispensed a number of outputs for commercial exploitation that include next-generation marine engines with higher efficiency and ultralow emissions, components and subsystems that can be further developed or retrofitted into new and existing ships respectively, and software that can be integrated into engines and processes.

“HERCULES has indeed been a go-getter in that sense,” concludes Bleuanus. “The integration of technologies and ideas through the phases has led to accelerated industrial research with all partners working towards the same outcome.”

Now, as the industry readies itself for more efficient and thoughtful business operations, it is the winds of change such as these that will ensure smooth sailing. Bon Voyage!