A doughnut-shaped inspiration for sustainable recovery

Some communities are taking a look at the concept of “doughnut economics” as a way to create a system that provides for human needs without depleting the earth’s resources.

Some communities are taking a look at the concept of “doughnut economics” as a way to create a system that provides for human needs without depleting the earth’s resources.

As the world begins to recover from the Covid-19 pandemic, some communities are looking for ways to build a “new normal” that incorporates more sustainable solutions into economic development. One model some policymakers are considering is doughnut economics, a concept developed by Kate Raworth, author of Doughnut Economics and co-founder of the Doughnut Economics Action Lab (DEAL). It offers a framework for sustainable development that is centred around the aim of meeting people’s needs within the planet’s means.

The doughnut consists of two concentric rings: a social foundation, or inner ring, for social conditions that must be met such as housing, healthcare and education, and an ecological ceiling, or outer ring, that must not be exceeded to avoid exhausting Earth’s resources.

The hole in the middle represents a shortfall in essentials such as food, social equity, and peace and justice, while overshooting the outer surface of the doughnut – the sprinkles – represents a transgression of the planetary boundaries that protects Earth’s life-supporting systems, leading to issues such as biodiversity loss and climate change.

The ideal is for humanity to thrive in between these two boundaries – in a doughnut-shaped space that is both ecologically safe and socially just – and not just strive for never-ending GDP growth. The model also recognises that economies, societies, and the living world are interdependent, and calls for degenerative economies to be turned into regenerative ones.

“Doughnut economics is not a new economic theory so much as a conceptual framework,” says Warwick Smith, co-founder and economist at Castlemaine Institute and an honorary fellow at the University of Melbourne. “It’s a way of communicating and thinking about the challenges facing 21st century economics and society as a whole.”

DEAL works to turn this concept into practice by developing tools to create what it calls a City Portrait that measures where a metropolis is in terms of the doughnut – identifying where there is a social shortfall and where there is an environmental overshoot. 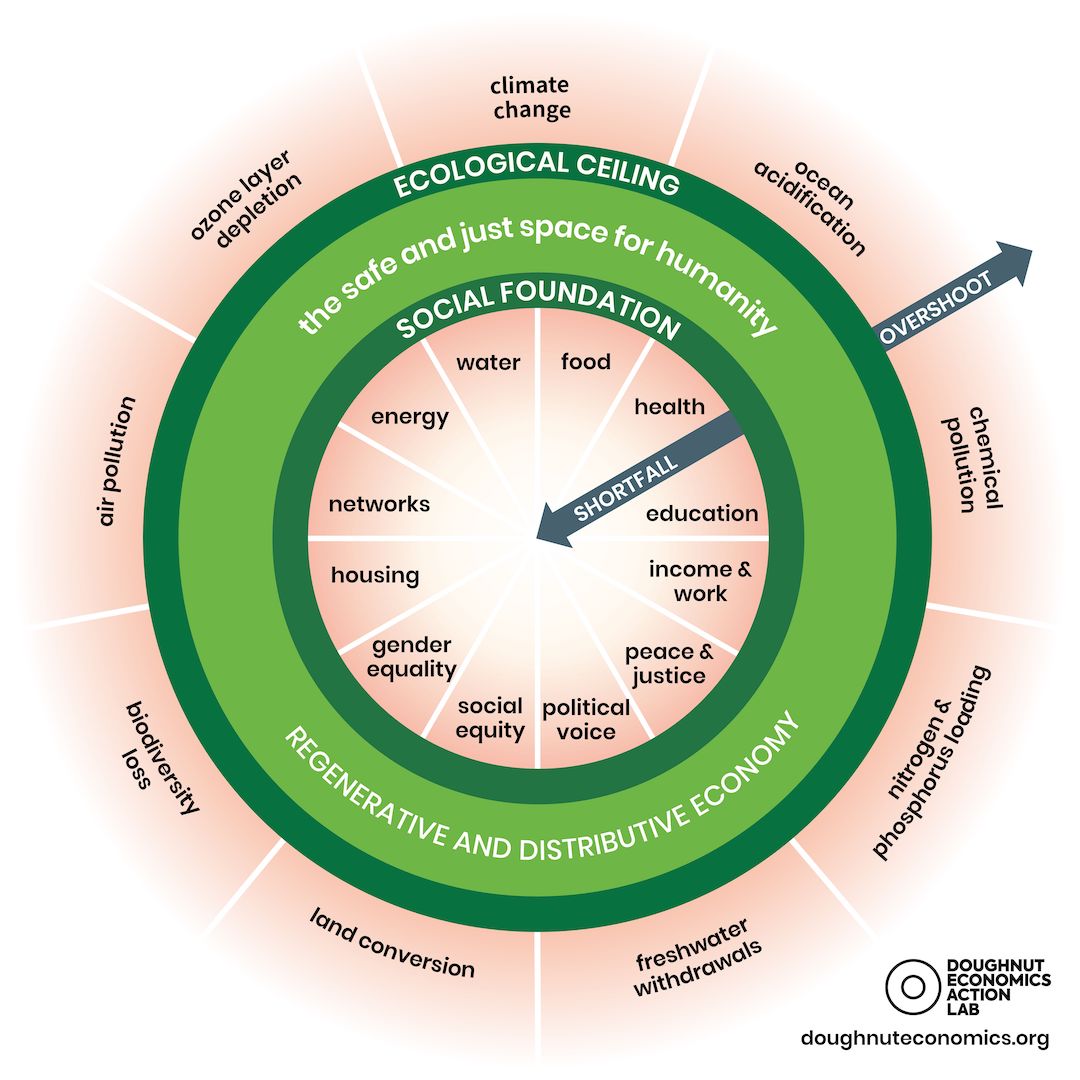 “A way to shape our economy differently"

In April 2020, at the peak of the pandemic, Amsterdam became the world’s first major city to adopt doughnut economics. Officials asked Raworth and her team to develop a City Portrait for Amsterdam that not only described how to use less raw materials and respect the Earth’s limits, but also focused on economic development and meeting social challenges.

Creating a circular economy strategy had been one of the city’s priorities for several years, and it was not intended to be a post-pandemic recovery plan, but officials found that their new ideas on how to rebuild the economy after the crisis were broadly welcomed.

“Our circular strategy is a tool to ensure we don’t go back to ‘business as usual’ but look forward to a way to shape our economy differently,” says a spokesperson for the City of Amsterdam. “That is why it is seen as a plan that we can use to recover our economy after the coronavirus crisis.”

One of Amsterdam’s biggest challenges is housing. In 2018, nearly 20% of the city’s tenants were unable to cover their basic needs after paying their monthly rent. A thriving city visualised in the City Portrait would see a sufficient number of affordable homes.

The model also considers Amsterdam’s impact on the wellbeing of people worldwide and highlights the work of local companies such as Tony’s Chocolonely, a chocolate maker that aims to eliminate modern slavery from cocoa production through transparent supply chains.

The city believes that many of its citizens are fed up with living in a disposable society and support its vision for the future.

“Of course, prices of consumer goods could rise if we start asking a fair price for raw materials,” says the city spokesperson. “Therefore, we don’t only ask our national government to raise the taxes on raw materials, but also to lower the taxes on labour. That way, it will become much more attractive (and cheaper) to reuse and repair products, instead of mining raw materials on the other side of the world and bring them here for production of new products.”

A global embrace of the doughnut model

DEAL’s model has also been piloted in the US cities of Portland and Philadelphia, but they are far from the only cities worldwide embracing the model.

In June 2020, Copenhagen voted to draw up a provisional plan on how the doughnut model can be used as an overall steering tool for the Danish capital’s economy. It was followed by the Brussels region in Belgium, the New Zealand town of Dunedin, and Nanaimo in British Columbia, Canada.

Regional variations are both inevitable and encouraged in doughnut economics, says Smith. For example, New Zealand has seen the creation of an indigenous Maori version of the doughnut, which flipped the concept by placing the environment at the centre, with social factors on the outer ring.

Other colonised countries such as Australia will also need to take into consideration the consequences of their past, he adds. “Indigenous voices are critical to any kind of successful implementation of the doughnut here, as is learning from their many millennia of experience living sustainably on this continent.”

A City Portrait provides a snapshot of where a city is at, rather than a prescriptive roadmap for the future, but that can be powerful enough in itself. “The very process of adopting the doughnut as a framework begins the key work that’s needed, which is social transformation,” says Smith.

“If we can genuinely change the goal away from economic growth – the first principle of doughnut economics – then we change the whole system.”