An oil tanker emits on average 0.085% of its contained cargo every week. This may not sound like much, but if you take a 320,000 deadweight tonnage (DWT) Very Large Crude Carrier (VLCC) as an example, this apparently small amount actually adds up to 270 tonnes of lost cargo every week. Take it a step further and look at an entire year and you will end up with a massive 5400 tonnes of lost cargo, assuming that the VLCC operates laden voyages for 20 weeks every year.

However, with Wärtsilä’s cutting-edge Voyage Emission Reduction (VER) system, it will be possible to make losses like this a thing of the past. The groundbreaking system allows up to 96% of the VOC that is typically lost as boil-off to be converted back into fuel. On a conventional VLCC, the VOC emissions will go back into the cargo tank, while tankers powered by Liquefied Natural Gas (LNG) will be able to convert the VOC into fuel for use during the voyage. Both systems represent a unique, game-changing opportunity to increase revenues while, at the same time, significantly reducing the vessel’s environmental impact.

The version of the VER that has been designed for conventional VLCCs is based on a straightforward technology: a simple plug-in unit captures the VOC that would otherwise be lost and recirculates it back into the cargo tanks. In doing so, it prevents the loss of up to 270 tonnes of cargo a week, while, at the same time, protecting the environment from these potentially harmful emissions. (Figure 1)

VOC emissions from cargo tanks contain both methane and non-methane hydrocarbons. Considering the example of the VLCC that operates 20 weeks of laden voyages and loses 5400 tonnes of cargo in the form of VOC each year, this translates to the equivalent of up to 20,000 tonnes of CO2 per year. With the Wärtsilä VER, 80% of that VOC is re-absorbed, thereby reducing local pollution by 80%.

A VLCC that re-absorbs 80% of the 5400 tonnes of cargo that would otherwise have been lost will be able to deliver an extra 4320 tonnes of cargo each year. This is equivalent to 27,700 barrels of oil, which, in turn, represents a huge amount of money – USD 1.9 million to be precise, based on present-day oil prices. Considering that a re-absorption version Wärtsilä VER costs around USD 1.2 million to install, the return on investment is excellent, equating to a payback time of a little more than six months.

The Wärtsilä VER re-absorption version is likely to be of particular interest to the global oil majors. Most fleet operators own the ships but not the cargo, but when an oil company owns the entire value chain, including a fleet of, say, 40 vessels, the opportunity to recover more than 4000 tonnes of oil a year would translate into a total saving of more than 160,000 tonnes of oil per annum, or USD 77 million worth of oil. 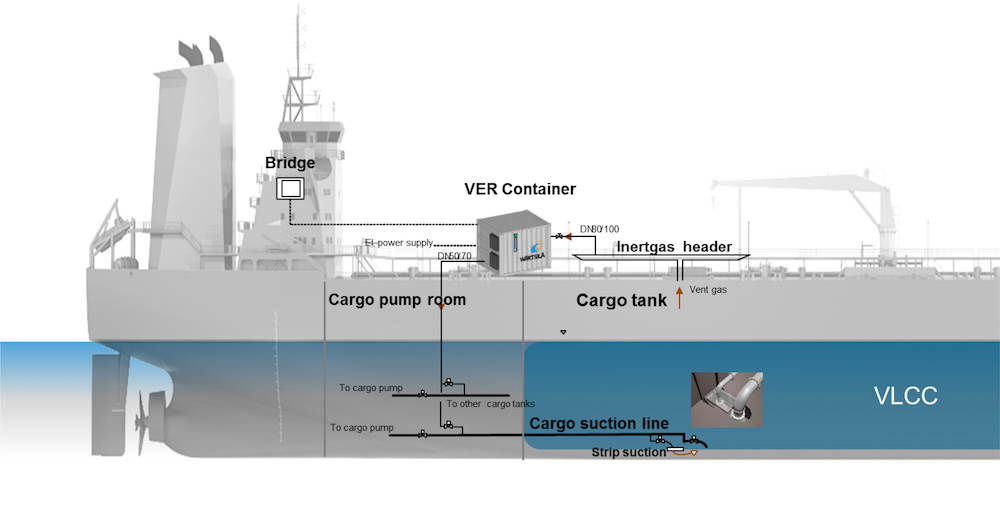 How does the VER re-absorption version work?

The Wärtsilä VER has been designed for easy installation, operation and maintenance. It comes in two versions; either with a capacity of up to 400m3/h (tankers up to 160 kTDW), or up to 800m3/h (tankers up to 320 kTDW). Both versions are delivered in a container that includes all the equipment needed to run the system. The only utility the ship needs to provide is electrical power.

Operation is automatic and no manual intervention is required. The plant operates within a fixed cargo tank pressure range and stops automatically at low pressure, while an automatic vent is activated at high pressure. As far as service and maintenance goes, routine maintenance will typically be carried out after the compressor and glycol pump have accumulated 5000 running hours. Standard maintenance includes changing the inlet filter and applying lube oil to the system.

Firstly, the rotary vane compressor on the VER is glycol-cooled with oil lubrication. Its oil consumption amounts to less than 0.5 l/day of operation. It has an air-cooled electrical motor with a power requirement of 35/46 kW. It also has an air-cooled heat exchanger that serves three purposes: firstly it cools the compressed VOC to an air temperature of + 5°C, secondly it cools the glycol and, last but not least, it creates ventilation for the container. The VER system also comes with auxiliary equipment such as a glycol pump, inlet filter and re-absorption units for three or four cargo tanks. (Figure 3) 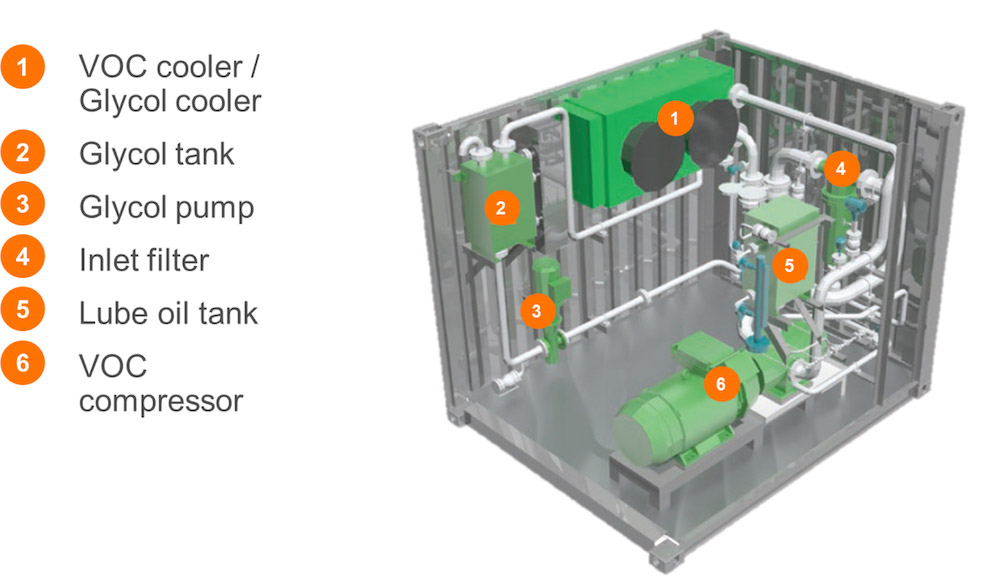 What makes the Wärtsilä VER re-absorption version even more unique is that it is so user-friendly. The automatic system includes a control panel that monitors the plant and sets off an alarm in the event low levels of lubrication oil, of low levels of glycol, high temperature in the gas outlet, low suction pressure, or high bearing temperature on the motor and compressor. Lube oil can be filled up from outside of the container and levels can easily be monitored using the gauges on the outside of the container.

The fuel version of the Wärtsilä VER is designed especially for VLCCs operating on LNG. While the existing LNG-fuelled VLCC fleet is extremely small – with only 20 vessels on order at the present time – there is every indication that this market will only continue to grow going forward. With the IMO’s 2020 sulphur cap regulation coming into effect in less than two years’ time, the market is in urgent need of a fuel alternative that will enable it to comply with new requirements, and LNG is quickly emerging as one of the most viable solutions. As a result, demand for LNG across all shipping segments is expected to increase significantly in the coming years.


The Wärtsilä VER fuel version is based on a patent-pending recovery and mixing technology. The technology has already been thoroughly tested at Wärtsilä’s test facilities for both four-stroke and two-stroke engines and is currently being installed on North Sea shuttle tankers at Samsung Heavy Industries (SHI). Tests have demonstrated that the VER fuel version is able to deliver savings of up to 20% for LNG-fuelled fuel tankers by mixing VOC with LNG fuel, enabling the vessel to operate on the mixture.

How does the fuel version VER work?

One of the features that make this system unique is its ability to reduce fuel consumption during both laden and ballast voyages. The recovery and mixing system on the Wärtsilä VER fuel version consists of an inlet filter, a VOC compressor, a VOC condenser, a separator, an LVOC tank and a mixing unit. In short, the system works by compressing the VOC to a pressure of 16 barg for two-stroke or eight barg for four-stroke engines. (Figure 4)

After compression, a sea water cooler reduces the temperature of the compressed VOC and consequently some of the VOC condenses and can be stored in a tank for use during the ballast voyage. During the Laden Voyage the non-condensed VOC (SVOC) is mixed with LNG fuel and used in the engines. During the ballast voyage, liquid VOC, collected during the laden voyage, is vaporised, mixed with LNG and used in the engines. The fuel mixing system continuously controls the mixing ratio between VOC and LNG in order to maintain the correct methane number (MN). (Figure 5)

In addition to the VER plant itself, a small deckhouse containing all the fuel-related equipment, such as the VOC plant, VOC vaporiser, LNG heater and vaporiser skid, and mixing valve unit, needs to be installed. In addition, an LVOC tank and LNG tank will need to be installed on deck. (Figure 6)

Containerships, on average, spend up to 6% of their time waiting at anchor due to delays at port, according to IALA. Read more on how the...

Meeting emissions targets of the future with technology available today

In an era of ever-tightening regulations for the shipping industry and increased concern for the environment, keeping close tabs on what vessels...