The livestock shipping sector is proving to be an example of how integrated navigation systems can make ship operations ever more joined up. In the case of Livestock Express, a Vroon company and an operator of a fleet of 15 livestock carriers – of which seven were purpose built in the past five years – the recent installation of  Wärtsilä Voyage’s Fleet Operations Solution (FOS) has not only enabled crews to optimise safe and smooth navigation; the added visibility of a dedicated ship-to-shore connection for navigation has allowed the company to increase remote support for crews, report daily conditions to regulators and improve training for shoreside operators.

Livestock Express has installed FOS, Wärtsilä Voyage’s integrated ECDIS and intelligent navigation package, on 13 vessels. According to Graeme Stephan, Operations Manager of Livestock Express, the overriding advantage of FOS is clear – the ability to directly monitor what is happening on the vessel from the shore

“Our fleet was well equipped with ECDIS and we provided the ships with all the equipment needed for safe navigation. However, we were reliant purely on emails and telephone calls to monitor the progress of a particular voyage. We had no direct view or control of our ships. we could never see what they were seeing, because you couldn't share screens or send plans and routings.” 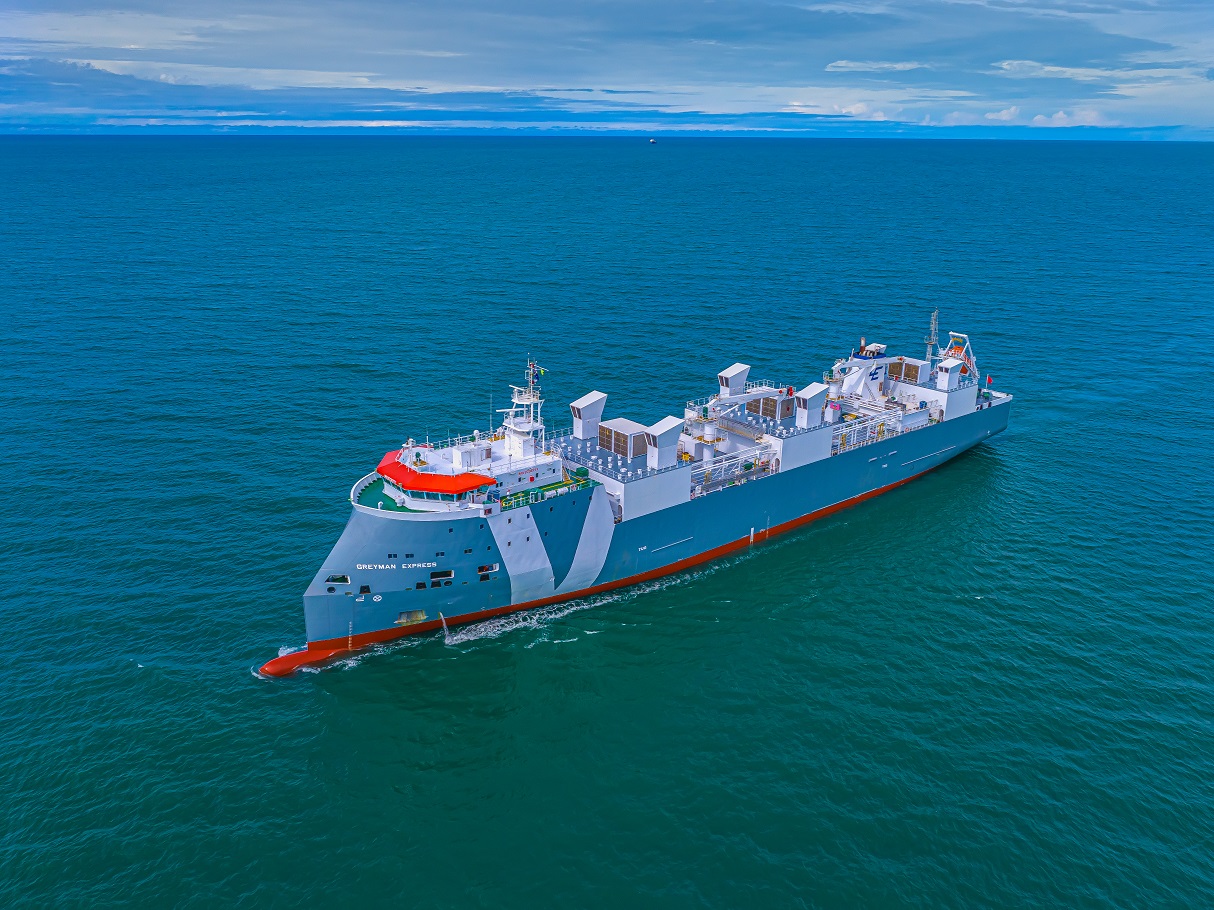 The real-time connection that FOS provides between ship and shore gives multiple opportunities. Stephan spent several years at sea and is familiar with the navigational challenges crews face. But Livestock Express has a young team of shoreside operators who, while highly qualified and educated, have no experience of navigation issues from the perspective of crew onboard a vessel. Here, Stephan finds FOS and its instant, secure connection between vessel and shore a useful tool.

“Having FOS has made it a lot easier to explain, particularly the meteorology side and even the charter and navigation side of operating vessels.”

Now we can see, when you're entering Emission Control Areas or sea lanes, for example, and how navigation changes. A picture tells a story and it's so much easier to give a bit of insight into the nautical side of the operating of a vessel using this tool.

Shoreside operators do not only use FOS for training, of course. Nor is the ‘visibility’ just a one-way channel; crew on shore can use FOS’s message function to communicate instantly with vessels when the need to agree on joint action points. Such direct communication within the navigation system has clear benefits of immediacy, moving further away from the use of overloaded or cumbersome email tools.

FOS is already helping crew to change old habits and improve navigation. Stephan cites the traditional use of the Archipelago Sea Lanes – a recommended (but not mandatory) routing for vessels sailing through Indonesian waters but not calling at a port.

“Our masters would previously use the sea lanes as standard, for no reason other than because they were recommended.”

Since we've had FOS, we have switched all our ships to use the shortest safe route. We can save up to a day on steaming on a single round voyage. That has already saved us a fortune in time and fuel consumption.

Livestock Express is seeing other performance benefits too. The company is running a proof-of-concept trial on two of its vessels for FOS’s performance management module, which enables the collection of real time hull and machinery data via the Wärtsilä SmartLog application. FOS can aggregate this data with cloud computing functions to provide a holistic view of vessel performance and potential areas for improvement.

“We were monitoring speed, fuel consumption and so on,” says Stephan. “But they were being monitored on a monthly basis and it was not extremely useful for the simple reason that we weren't getting much data out of it. If we can get data more often we can see the trends a little bit better and use that to plan forward and try to improve where we can.”

As an example of the performance benefits that can be gained, Livestock Express recently optimized navigation on a regular route between Vietnam and Australia. FOS’s Voyage Benchmarking tool identified that the vessel was sailing too far west of Borneo. The company performed a safety check on the potential shortest route generated by FOS, deemed it safe and instructed crew to sail closer to the Borneo coast. As a result, the vessel has reduced fuel consumption on that route by around 10%. 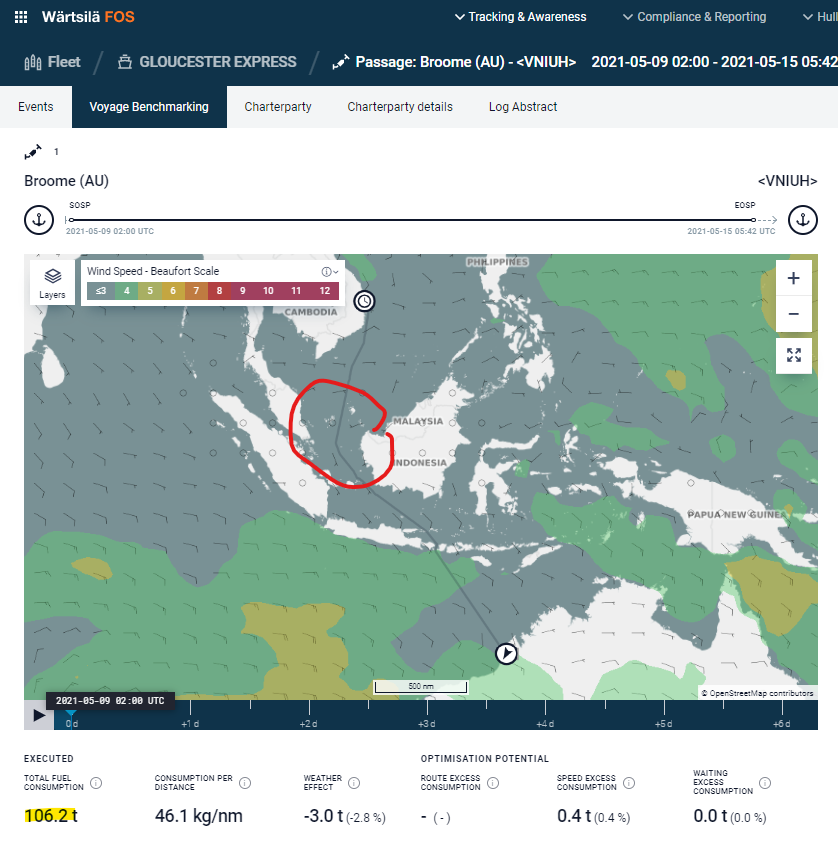 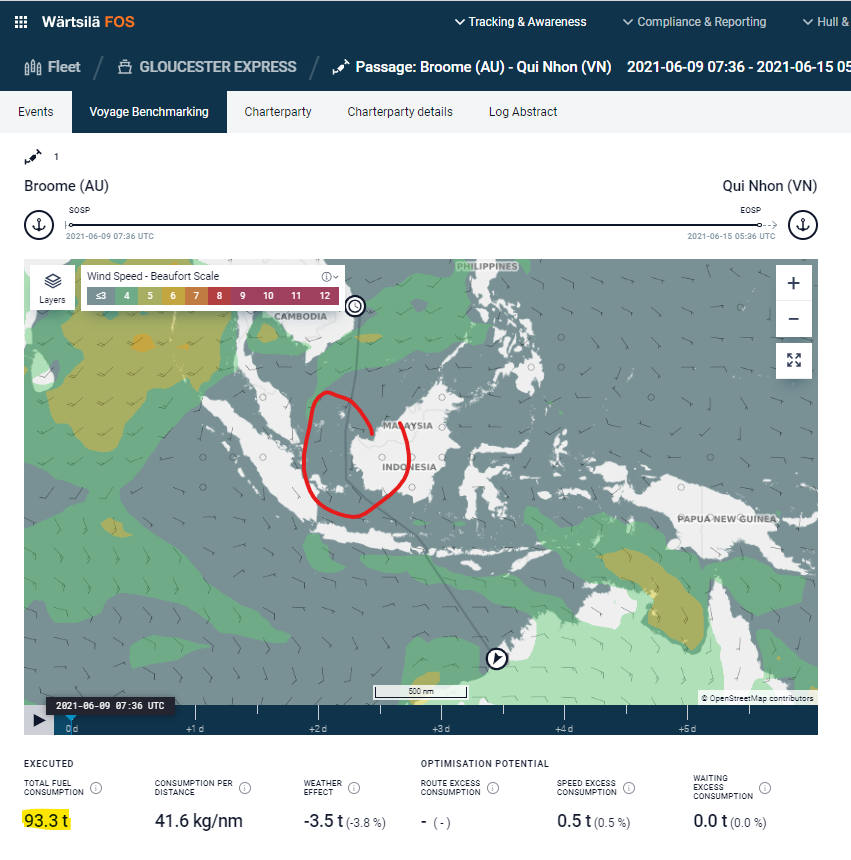 The capabilities afforded by FOS also play a critical role in the company’s efforts to make life better for animals onboard – a crucial element of operating livestock vessels. To understand why, it is important to appreciate the role of routing in this business. There are several reasons to avoid bad weather, Stephan explains.

“We have always taken pride in the fact that we hold the welfare of the animals as paramount. The movement of the vessel has a direct impact on the welfare with regards to the appetite of the cattle and the injuries of the animals. If you're rolling or pitching heavily, they can slide and slip and injure themselves. Also, as soon as an animal is stressed, the first thing it does is stop eating and immediately loses weight. So the less stressful we can make the environment, the better for the animal.”

Weather routing has always been important for Livestock Express. With the installation of FOS, for the first time the company has a direct link to monitor and to adapt routings where necessary to sail for calmer seas and happier passengers.

There is no global regulation governing livestock exports by sea, but many national authorities set their own rules. The Republic of Ireland is a recent example visited by Livestock Express vessels that typifies regulatory requirements, says Stephan.

“One of the requirements if you are carrying animals from Ireland is that you cannot travel in areas of above certain wind forces and sea heights. You must report the weather from the vessel back to them each day. We can approach the authorities and show them our intended route and so on. They are happy with that because it is a proactive, visual plan.”

A similar case with New Zealand authorities, especially the Ministry for Primary Industries (MPI), is relevant as well.

“We send screenshots of what we're doing that day as well as where we plan to sail in a week's time, plus the track of the storm and how it's moved or is going to move. I don't think anybody has done that before, because this is the first time that we've had FOS on a vessel sailing from New Zealand. I sincerely hope this is a good learning experience for MPI as well.”

There are several advantages to using an integrated navigation solution such as FOS. In a sector where animal welfare is critical, any tool that improves navigation is valuable. But it is the enhanced visibility that FOS provides that allows the same tool to be used to train operators and to safeguard regulatory compliance – a triple win for digital navigation.

Safer navigation, reduced crew workload and improved transparency are at the top of the wishlist for tanker operators. Zeaborn Ship Management...

This webinar explores hardware and software retrofit options to make your existing vessels compliant with the new IMO regulations...

Integrated solution for route planning, optimisation and monitoring, and the entry point to FOS.