Sabetta: Innovation above the Arctic Circle

Sustainability Port and Traffic Management
5 min read
Published
02 Jan 2020
Text
Alex Stevens
Photo
Transas
Navigation along the Northern Sea Route is increasing, but traversing the route remains challenging and requires the highest level of precision. The port of Sabetta in the Russian Arctic is an example of how new technologies can enable safe navigation in extreme conditions.

As the ice in the Arctic melts, more and more ships are navigating these seas each year. The Northern Sea Route in particular, which runs along the Russian coast from the Barents Sea to the Bering Strait, is gaining in popularity, as it significantly reduces travel time between Europe and Asia. Last year, the volume of goods passing through Russian Arctic ports reached a new record. According to the Russian Transport Ministry, Arctic ports handled 92.7 million tons of goods in 2018 – an increase of 25% from the year before. More than two-thirds of the volume is made up of liquefied natural gas (LNG) and oil products.

The Arctic route remains extremely challenging to navigate, however. Even during the summer navigation period, the ice does not disappear completely. Additionally, fog often restricts visibility, so it is not always possible to see the ice sheets. The weather also can be rough and unpredictable. In the winter months, the long Polar night begins, the temperature drops as low as -50 degrees Celsius, and strong winds and blizzards make journeying above the Arctic Circle especially hazardous.

These challenges mean that navigating the Arctic requires the highest levels of caution and precision. Developments in the Russian port of Sabetta show how the newest navigation technology can help. 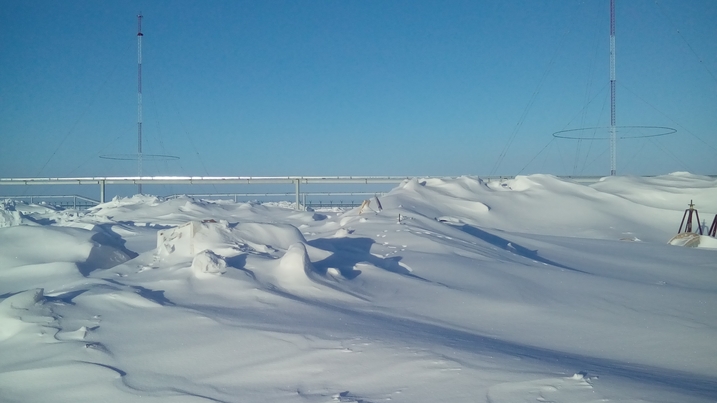 Just 12 years ago, Sabetta, a tiny village beyond the Arctic Circle on the remote Yamal peninsula, had a population of only 19. But everything changed when Russia, France and China launched Yamal LNG — an ambitious project to produce liquefied natural gas. In short order, an LNG plant was built, followed by a large airport and a new port in the estuary of the Ob River capable of accepting large LNG tankers and icebreakers. A special channel, approximately 50 kilometres long and 300 metres wide, was dredged to allow tankers to reach the port in the Gulf of Ob.

“This was our first project on such high longitudes,” says Roman Modeev, Shore-based Systems Director, Transas Navigator, who instigated the project. “We are already known in Russia as a reliable supplier – out of 25 Vessel Traffic Systems in the country, 23 were equipped by Transas – but for the extreme Arctic conditions, we had to adapt some of our technologies and find new solutions.”

Transas installed and equipped a control centre and a radio tower in the Port of Sabetta, as well as two remote radio towers on the shore of the Gulf of Ob. The towers are part of the system that keeps track of vessels, ensures safe navigation and prevents collisions. The remote radio towers are located in areas difficult to access. In the winter, engineers can only access them by taking a four- to five-hour ride in an all-terrain vehicle through the tundra. In the summer, they can be reached only by the sea. 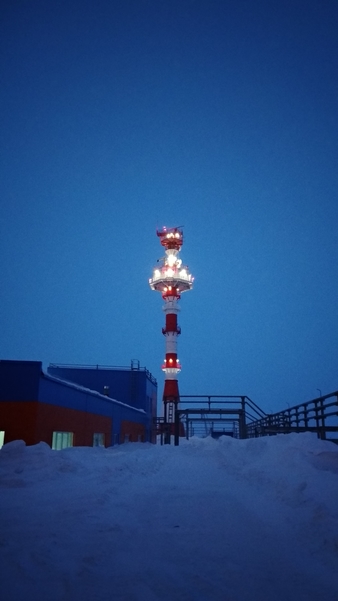 The control centre and a radio tower in the Port of Sabetta.

“The equipment has to be exceptionally reliable,” Modeev says. “We pay particular attention to duplication, backup solutions and possibilities for remote monitoring.” An employee of the control centre in Sabetta can check the settings and possible errors in the remote equipment using special software. Additionally, Transas engineers have designed solutions that protect radars and cables and help keep them functioning in the extreme Arctic cold.

The installation process took several months, and Transas’s engineers had to work under harsh meteorological conditions. The company designed special outdoor clothing for its workers and made sure they completed safety training.  “Polar bears came to one of our sites 100 km to the north of Sabetta, and the guards had to shoot in the air to scare them away,” Modeev says. At the end of December 2017, the navigation systems were successfully tested. 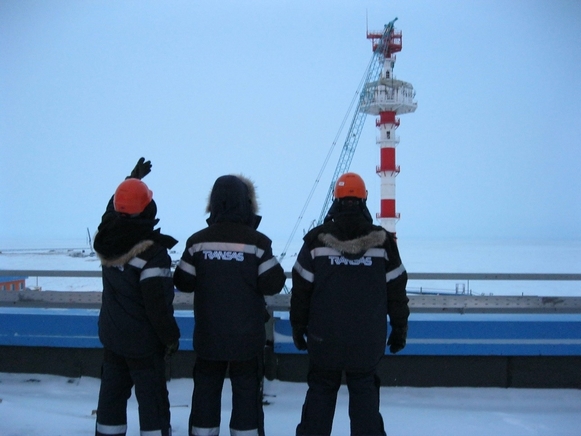 The construction at Sabetta offered an opportunity to try out new technologies.

“During the planning phase, we looked to the future and included everything that might be needed to implement the e-navigation concept,” Modeev says. The control centre includes state-of-the-art software that is capable of automatically exchanging information directly with vessels. The result is an even more precise and safer mode of navigation. Today, LNG tankers operating in Sabetta are equipped with Transas-integrated bridges, allowing data to transfer automatically between the vessel and the control centre.

The technologies used in Sabetta are part of Wärtsilä’s Smart Marine Ecosystem, a strategy focused on connecting ports, vessels and customers, optimizing routes and achieving the greatest efficiency.

“We laid foundation stones for the Smart Marine Ecosystem, as we have on-shore vessel traffic management systems and shipping companies as our clients,” says Vladimir Ponomarev, Director for Solutions, Wärtsilä Voyage Solutions. “It will allow us to develop new services based on the digital exchange between different elements of the system.”

Sabetta is a promising example of how the latest technology can be used in challenging circumstances, which will become increasingly important as the need to develop infrastructure in hard-to-reach places grows.

Getting smart with navigation

In a world of connectivity, why shouldn’t the maritime industry be reaping the benefits of optimised navigation? Introducing Wärtsilä’s...