From port developments to smart ship systems, a growing range of maritime projects depend on simulation technology to provide data that would otherwise be costly, perhaps even impossible, to obtain.

Exponentially increasing computer power over the past fifty years has transformed the world. Even ten years ago, teenagers were playing Candy Crush on phones 400 times faster than the computers that took Neil Armstrong to the moon in 1969. That same progress has underpinned the advance of simulation from a basic training tool to a technology that is today helping to design next-generation ship systems and plan for increasingly complex marine environments.

When the Maritime Institute of Technology and Graduate Studies (MITAGS) opened its doors in 1972, ship simulators were just emerging as a way to teach seafarer skills. Even simple simulations took huge processing power.

The mainframes for just the projectors took up an entire room. Another room ran the simulator itself. Now we can run simulations from laptops.

Today the company uses distant descendants of those early technologies to help ports, pilots and crew prepare for ship handling in some of the world’s most challenging areas. One notable project saw MITAGS deploy its simulation expertise to optimize the approach for very large crude carriers to an offshore oil terminal in Brazil. That simulation used data on currents gathered from sensor buoys to replicate the conditions faced by pilots. In another project an energy company is simulating a new offshore windfarm to establish the ‘operating window’ for service vessels - the weather conditions and sea states in which access is possible.

“The time to find out a vessel cannot be safely maneuvered into a port is before the ship arrives,” says Mr. Paine. “Additionally from the financial aspect, if you can only get a ship in for half the year due environmental conditions exceeding safe operational limits that’s probably not an investment you can afford to make. Today, engineering companies design the terminals /channels, and we program it into the simulator. This allows the pilots and engineers to evaluate the design to ensure the vessels can safety transit up to the design’s environmental operation limits. It also allows for optimizing the design to minimize dredging costs, and increase efficiencies.

Modern processing power has enabled a whole new level of fidelity and connectivity. Instead of one simulator working in isolation. Institutions like MITAGS can connect whole series of simulators together. This allows companies to build a more comprehensive understanding of complex situations. Take the example of an ultra large container ship berthing at a busy port. The vessel captain and assist tug operators can each have their own perspective represented in separate simulators – either 150 feet high or close to the water - while a project leader has another simulator and can switch between these perspectives.

As technology improves, the mathematical models underpinning simulation are also becoming richer. The key components of marine simulation – whether used for training, port development or systems testing – are the simulator core, which includes hydrodynamic modelling, and the database of area models and ship models. Wärtsilä’s simulator core, Navi Trainer Professional, is built on more than 25 years’ experience in simulation. Its database – the Model Wizard including Scene Editor (area models) and Virtual Shipyard (ship models) have been developed with an unparalleled customer base. According to Johan Ekvall, Solutions & Business Development Director, Wärtsilä Voyage, both are critical factors.

“The fidelity of the hydrodynamic vessel models is key to having high confidence in the simulation results.,” he says. “There are a number of theories explaining hydrodynamic effects around the world and we combine them, based on benchmarking, to get the most accurate representation. We have honed our modelling over several years and our large base of research and development customers means we have applied the models to many situations, giving us valuable feedback.”

These capabilities have advanced steadily over the years and will continue to improve. But the real game changer over the past few years, says Ekvall, is the advance in usability. This is down to the introduction of Wärtsilä’s Automatic API, a web-based application programming interface (API) that enables users to gather data from their simulations independently of Wärtsilä.

Previously we had to configure the data output for our customers required each time. It meant that small changes to the data you are collecting could take a long time.

Mr. Ekvall explains: “With the API – which is web-based rather than relying on proprietary process internal to our platform – customers can do nearly all the reporting on simulations themselves. Wärtsilä delivers the systems, installs simulators and so on, but the API simplifies the use and makes it much more cost efficient.”

The evolving ease of use is an important factor in MITAGS’ research simulation work. Mr. Paine explains how years ago – before Wärtsilä developed its Virtual Shipyard model database to the extent it has today – the institute used to have to ask the simulator manufacturer each time a captain or pilot recommended a change to a model. Today it can be done almost instantly. The Automatic API is another step in making simulation almost entirely customizable by the research institutions themselves.

The ability to rapidly tweak simulation models and modify data collection is becoming critical in an emerging area of research development; the testing of smart ship systems. Established around two years, the Intelligent Shipping Technology Test Laboratory (ISTLAB) at Finland’s Satakunta University of Applied Sciences (SAMK) is a good example of a new kind of facility that is appearing as shipping prepares for greater autonomy. In the case of ISTLAB, the focus is squarely on studying remote pilotage capabilities. 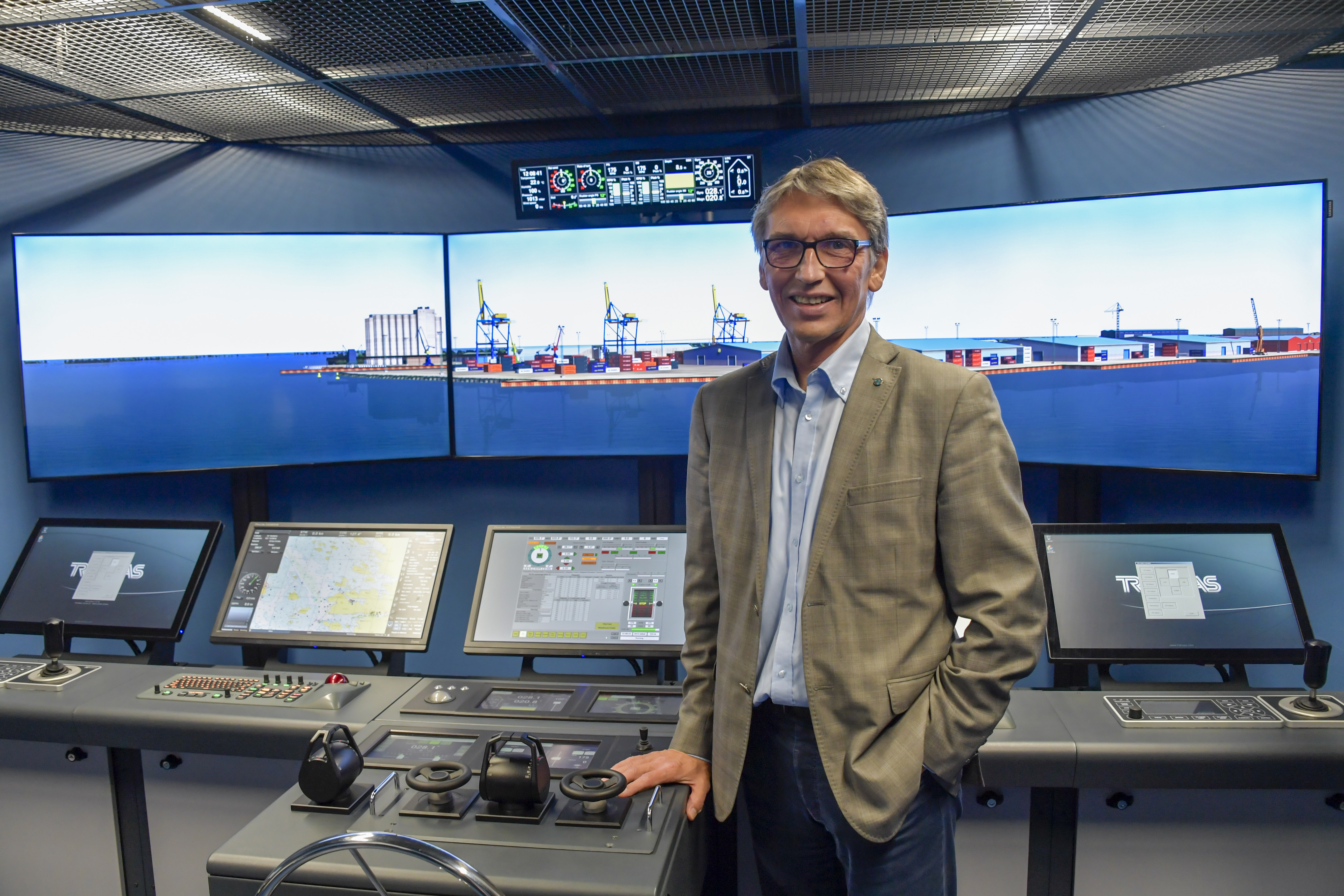 Sauli Ahvenjärvi, Project Specialist and Principal Lecturer, SAMK, explains: “We think remote pilotage because we think that it might be one of the first autonomous applications to be commercially applied. There is a need for remote pilotage all over the world. In Durban Port in South Africa, I saw pilots being brought on board by helicopter, which as you can imagine that is rather expensive. And in many ports you sometimes have weather conditions that make bringing the pilot on board by a small boat very dangerous.”

There are, says Mr. Ahvenjärvi, several open questions about how remote pilotage might be performed. Among the most interesting is the minimum amount of information needed from the ship in order to make it possible to maintain proper situational awareness, so that the pilot - wherever he is actually located - is aware of what is happening on and around the ship. Simulation is a cost-effective means of finding the answers to such multi-faceted questions. 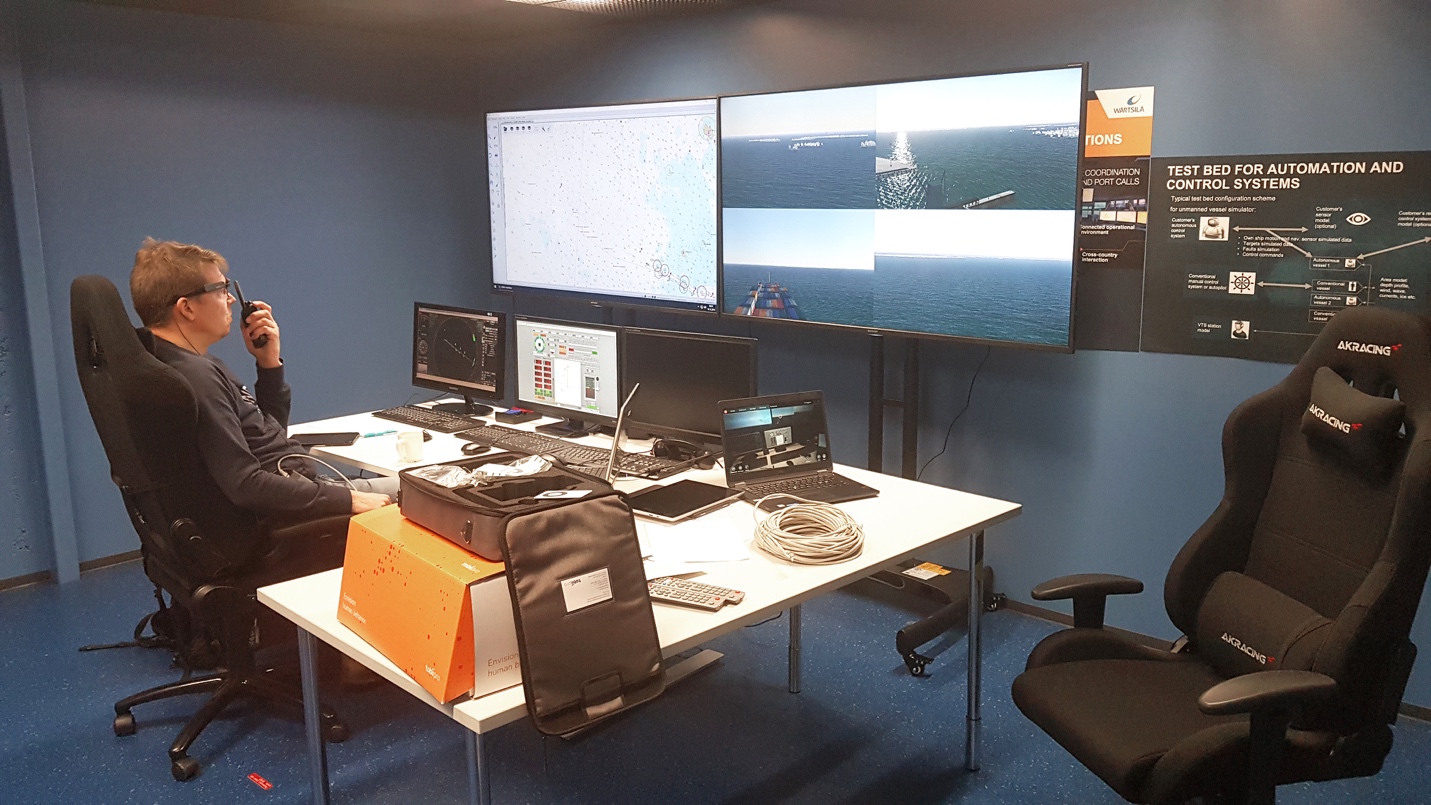 To address these important questions, two years ago SAMK opened ISTLAB in conjunction with several Finnish government agencies. The laboratory builds on the five simulators already installed at SAMK with a remote pilotage unit (RPU). This simulates remote pilotage operations as well as the transmission of data and voice communication between the unit and the ship under pilotage. One of the five simulators has been converted to a remote monitoring and control unit (MCU) which collects measurement data from onboard equipment in real time and presents it to the operator. The set up also includes equipment to analyze the RPU and MCU user interface and operator functions, including an eye movement tracker.

The ISTLAB simulator ecosystem can be rapidly re-configured to represent at least five use cases, ranging from remote monitoring of manned vessels to remote control of unmanned vessels. Mr. Ahvenjärvi notes the speed with which Wärtsilä has been able to introduce the new features.

You can add new functions and reconfigure the simulator much easier than before. I don't know if Wartsila has had to create too much new software, but they have combined the existing modules in a new way.

The future of simulation for research and development rests on improving ease of use even further, making simulators ever more adaptable as the modelling and databases underlying them become more accurate and exhaustive. If today’s phones could take us to the moon, perhaps tomorrow’s simulators can at least drive us towards safer and more efficient ship systems and operations.