There’s a new silk route in the making, which stretches all the way from the South China Sea and South East Asia, through the Indian Ocean and Middle East area, into the Eastern Mediterranean. We’re talking about China’s ambitious 21st century Maritime Silk Road, which will connect it to Eurasia.

According to estimates, China has already invested USD 20 billion in ports and terminals in the past year. That’s not all. Reports suggest that by mid-2017 the China-owned commercial fleet, excluding Hong Kong-owned vessels, reached 147.2 million gross tons. This makes it the world’s third largest fleet owner at 11.5 percent of the global total after Japan and Greece.

China’s USD 1.2 trillion maritime industry has been growing at 7.5 percent annually for the past 5 years and now accounts for nearly 10% of its GDP. The country is targeting to have the marine sector account for about 15% of its GDP by 2035. To do that, it is setting up world-class high-end marine industrial clusters in Guangdong-Hong Kong-Macao Greater Bay Area and developing Shanghai and Shenzhen into global marine centres.

“The ship-owning and financing side has been drastically growing, transforming China into one of the global leaders in the maritime world. Traditional vessels built in China, targeting the merchant market, are now giving space to more complex constructions like tankers, gas carriers and cruise vessels of the future,” says Maik Stoevhase, Director - Automation, Navigation, Communication & Integrated Systems, Wärtsilä Marine Solutions.

China is also simultaneously reorganising its state-owned shipping companies, COSCO & China Shipping and consolidating them for better efficiencies. According to reports, by 2020, the combined entity of these two shipping companies will be the world’s largest container terminal operator by capacity as opposed to their current global rankings of four and eight respectively. That in turn is expected to dramatically change global trade.

Mark Greeven, Professor of Innovation and Entrepreneurship, Zhejiang University explains, “China's industries have shown to be eager collaborators, both domestically and internationally and especially the private sector has embraced partnerships and joint ventures to enhance capability and gain experience. We also see an innovative way of organising and partnering emerging in China: business ecosystems with hundreds of partners and joint ventures.” Greeven has been collaborating with hundreds of Chinese and foreign start-ups and advising Fortune 500 MNCs in China and Europe about their innovation strategy and intrapreneurship.

To understand the role of joint venture and partnerships, it’s important to step back and view the country’s ship building sector. A decade ago South Korea was the world’s leading ship building nation followed by China and Japan. But according to reports, this year, South Korea’s order book is half that of China’s.

South Korea has traditionally had an advantage over China as far as the quality of shipbuilding was concerned. But that’s not the case anymore as China is fast working on not only digitising its marine sector but also making technological advancements in manufacturing ships. That in turn is helping it compete with better quality South Korean ships as well as more expensive Japanese ships.

China’s new-found status of building more complex ships has primarily been driven by its ability to forge meaningful joint ventures (JVs) and partnerships based on global manufacturing know-how and technological advancements.

In the past, Wärtsilä has also struck agreements for strategic cooperation between CWEC (JV of Wärtsilä & CSSC), Wärtsilä, and Hudong-Zhonghua Shipbuilding Group (subsidiary of CSSC) to work closely on new-build vessel project opportunities for engines and other marine equipment, and for jointly optimising vessel concepts.

“The two joint ventures established with CSSC, CWEC and CWE&A, represent a clear edge for Wärtsilä when it comes to market positioning and building a solid foundation for future business relationships. Partnering with a strong player like CSSC drives our conviction that we’ll be able to capture the opportunities not only when it comes to powering cruise ships of the future but more importantly providing highly complex and integrated electrical solutions for those cruise ships,” says Stoevhase. 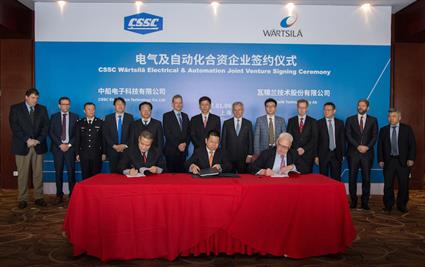 A report by Cruise Lines International Association (CLIA) notes that China accounted for 67% of Asia’s Cruise Line passenger volume and about 2.1% of the world’s total Ocean Cruise passengers in 2016. Experts believe this market is set to rise significantly in the coming years due to growth in population, growth in wealth, search and access to higher-class services and luxury along with a stronger attention to the environment. That makes China an attractive market in terms of cruise potential growth.  For now, though, it looks like cruise liners have just about skimmed the surface of what China’s massive blue economy has to offer.

China is changing its ‘Qi’ (vital energy) in favour of the environment and has emerged as the world’s renewable energy superpower. But unlike many...