Malta prepares for an LNG-powered future

The Mediterranean energy market is preparing for a paradigm shift, following the introduction of the Medium Combustion Plant Directive (MCPD), which limits emissions of pollutants from medium-sized power plants, and the updated Large Combustion Plant (LCP) Best Available Techniques Reference (BREF) document for large combustion plants. The new LCP BREF, likely to be approved by the European Union this year, provides the basis for the permitted emission levels for large and existing liquid and gas-fired engine plants.

Until now, isolated power generation systems such as those on the Mediterranean islands were subject to exemptions. But the MCPD stipulates that they will cease to apply after January 2025. To carry on operating, power generation companies on the islands will either have to switch to liquefied natural gas (LNG) or implement a treatment solution, the latter of which is not economically viable in the long term.

One Mediterranean island that will not be caught unawares is Malta. The country, which is one of the smallest in the world, with an area of just over 316 km2 and a population below 450,000, operates only two electricity plants totalling 571 MW. In 2014, Wärtsilä signed a major contract with Shanghai Electric Power Engineering (Malta) Co., Ltd. (SEPEM) for the conversion of one of these – the Delimara D3 Power Station, located in the eastern part of the island – to operate on natural gas. 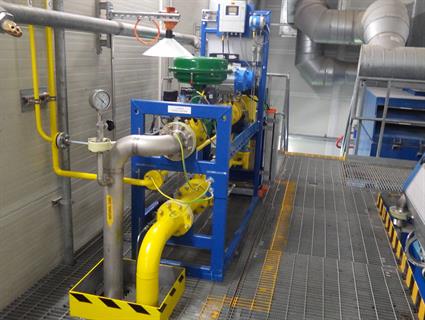 The Delimara D3 Power Station was originally equipped with eight Wärtsilä 46 engines operating on heavy fuel oil (HFO). The first phase of the conversion project made it possible for 50 per cent of its operations to be powered by LNG and this could finally be realised in early February 2017, when third-party supplier Electrogas Malta started supplying LNG to plant. Once phase 2 of the conversion is completed in August, the Delimara D3 Power Plant will be equipped to run entirely on LNG.

Heikki Huhtala, Senior Project Manager, explains that the first tests on the gas conversion had to be carried out using light fuel oil (LFO) because LNG was still not available on the island.

“Because the LNG arrival was unclear for the customer, they decided to convert the first four generating sets to Wärtsilä 18V50DF engines, which are able to operate on gas and also run on LFO. This created added security in case the gas delivery was delayed or in the event of future interruptions in gas supply,” he says.

The remaining four generating sets will be converted to Wärtsilä 18V50SG pure gas engines optimised for gas operation in phase 2 of the project.

In addition to the engine conversions, the full Wärtsilä engineering, procurement & construction (EPC) project also includes the delivery of a gas pipeline, the valves and units needed for gas pressure regulation and filtration, as well as modifications for cooling systems, exhaust gas systems, instrumentation, plant automation and safety systems. Wärtsilä is also responsible for delivering all materials to the power station in Malta, along with dismantling and installation, and testing and commissioning works.

As the power plant begins to operate on natural gas, emissions will be reduced, ensuring compliance with EU legislation. The operating costs of the plant will be cut due to decreased abatement system operating costs. The conversion will also enable D3 Power Generation Ltd. to reduce its fuel costs, resulting in improved cost efficiency. Furthermore, the need to store liquid fuels at the plant will be reduced when LNG is used as the primary fuel source.

Huhtala explains that Wärtsilä has a major competitive advantage in its extensive project management experience and multiple reference cases from similar projects.

“When carrying out a conversion of this kind, we take into account every aspect, from safety to the operational reliability, as well as providing the requisite performance guarantees,” he says.

Wärtsilä ensured the short downtime of engines, while optimising the future operation and back-up needs of the conversion. The outcomes are promising.

“We are very happy to be working with Wärtsilä on this conversion project. The project in Malta is Shanghai Electric Power’s first step in Europe, and we look forward to a fruitful co-operation with Wärtsilä also in the future,” says Tan Qing, Project Manager, SEPEM.

Huhtala, beaming with pride, is confident of Wärtsilä’s skills. “In our services projects, our experienced, skilled personnel maintain a first-rate service mind-set to serve and support our customers in all their needs,” he concludes.