Four inefficient shipping regulations that no one talks about

For an industry that’s about 5,000 years old and moves approximately 90% of the world’s goods, while navigating some of the most challenging environments on international waters, there are bound to be a bunch of rules. In fact, there are so many, it’s almost impossible to give an exact number.

Shipping was amongst the very first industries to adopt the widely implemented international safety standards. Because of its inherent global nature, the International Maritime Organization (IMO) has developed a comprehensive global maritime safety regulations framework. But that’s obviously not all. There’s SOLAS, MARPOL, COLREG, LOADLINE AND ISPS, which just cover ship operations. Then there’s STWC and ILO 147 for the seafarers, and ISM dealing with the shipping companies. On top of this, there are numerous local and port regulations to follow, certifications to obtain, taxation frameworks, cybersecurity guidelines, along with many other maritime instruments concerning more specific issues that are also in force worldwide.

To put it mildly, shipping’s regulatory framework is complex.

But what makes this landscape sometimes unnecessarily cumbersome are obsolete rules and requirements that have lost their relevance with time. “We're using AI on ships while forcing them to have a bell on board. In between these two generations of technologies, there’s a huge gap that’s getting too big to manage,” says Hendrik Bußhoff, Head of Product Autonomy Solutions, Wärtsilä Voyage. “With every technological advancement, we keep adding new regulations to the books without retiring or at least reviewing the old ones.”

Many of these old conditions of operation are mindlessly enforced, and unnecessary solutions are engineered to incorporate them in modern automated systems merely to check a box.

Here are four such examples of obsolete regulations and redundant systems that shipping could sail without.

In reduced and low visibility conditions, as per rules, a ship is supposed to sound the horn to signal its presence to other ships. In return, other ships are required to keep a lookout 'by sight and hearing'. On most ships, when you go on the bridge wing, you hear your auxiliary engines, engine room fans and possibly the noise of a few hundred reefer containers. There’s hardly a chance of hearing another ship, not to mention determining its accurate bearing and range. So why do we have this requirement? That's because back in the days, you had little choice but to listen. And it did work well when you were on a sailing ship or older three-island designs where the bridge is separate from the engine. But today, it’s a different scenario. You no longer have to depend on hearing other ships to be aware of their presence or sound the foghorn to make them aware of yours. We now have a rich set of technology choices to solve this archaic problem that are much better and more accurate than honking the horn or ringing the bells and gongs.

Unmanned engine rooms are a good example of similar progression. Original regulations required an engine room watchkeeper to utilise their senses of hearing, sight, smell and touch. But when we substituted human watchkeeping with 'unmanned' technological solutions, we didn't have to substitute the senses of touch and smell. “That's because, 50 years ago, someone was brave enough to say it doesn't make sense anymore, given all the technological advancements. Take the example of smell, for instance: The original purpose behind this requirement was to ensure that the whole ship doesn’t go up in flames. But today we are better off with a contemporary fire detection system than trying to sniff out smoke. So, we decided to get rid of the ‘smell’ part of the regulation. And, thus, in engine rooms, we have advanced a little further than we have on the bridge,” points out Bußhoff.

There are many digital ways today to quickly and efficiently record data. Yet, the golden standard to date is writing things down. This makes the information neither searchable nor can it be structured or unified. Similarly, like everyone else, ships start their days at midnight and yet are still required to file noon reports. "Noon reports made sense when navigation was based on stars, and around noon the sun offered a convenient opportunity to calculate the vessel’s position. We definitely no longer depend on the sun to determine the ship’s position and yet continue to obsess with noon reports," says Bußhoff. “Ships are generally not even required to carry sextants anymore. So, even if you remembered how to use it, your noon position often is just out of reach nowadays.”

Lots of time and money is spent on adjusting and operationally monitoring the deviation of the magnetic compass. However, what used to be a tool of immense value on wooden ships, now delivers questionable results on today’s ship made of steel. As we know, steel corrupts the core alignment of the compass that’s based on Earth's magnetic field. And it doesn’t get any better when you have thousands of containers made of, well, steel again. Meaning, the compass has to be reconfigured during every port call as every loading and unloading operation disrupts your careful adjustment. And so, what is often perceived as your last navigational resort to bring you home if the lights went out, has every chance of underperforming when it is needed the most. But then again, considering today’s systems, your engines most likely also went out with your lights, making having the compass futile again. 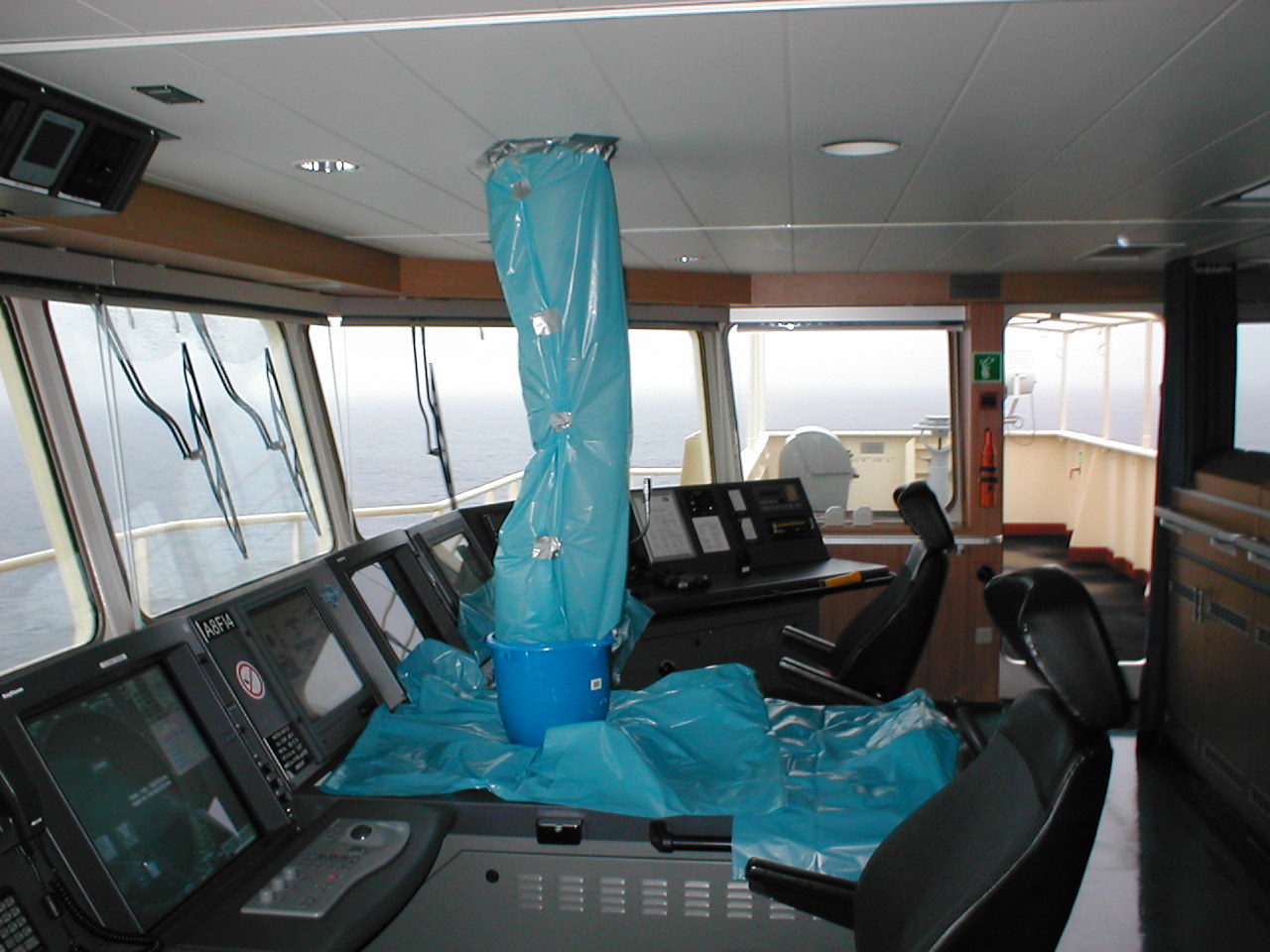 But that's not all. “There is a particular failure mode on many new builds connected to the magnetic compass,” tells Bußhoff. “Because there is a requirement to have the compass visible on the steering station, many ships have a periscope-like duct, pointing upwards. This open duct catches not only light but often rainwater, which finds its way down, dripping directly on instruments, damaging them and often triggering the same short-circuit against which the magnetic compass is immune to.” Thus, the question here is: Does the compass still solve a real problem on board? Or is it just another nugatory remnant from shipping’s evolutionary past, only delivering a perceived sense of safety?

To give an example, we simulated an inland voyage carrying grain from Nakskov in Denmark to Salzgitter, a small port about 200 kilometres south of Hamburg, Germany. The journey starts somewhere in the Baltic Sea, and we travel down Germany’s inland river system. To complete this single journey, it requires six different operator qualifications and certifications (see image below) along with expert knowledge of the German language. Starting with the standard deep-sea certificates of competence to the different pilot exemptions certificates and separate river licenses along with a Class A general inland waterways license, it can take about ten years of training to get there. In short, no one person can be expected to have all these skill sets alone. So, typically a vessel would have to have multiple crew members on board to be able to navigate this small stretch or spend a handsome amount on getting special pilots’ assistance at each junction.

The bigger problem with such an arrangement is that all these qualifications and pilot exemption certificates are then tied to resources on board a specific ship, in a particular area.

Instead, if the operations were carried out by a remotely monitored vessel, there won’t be a need to have six different specialists on board anymore. Having the right competencies available in a single remote-control centre, and used only when they are needed, would both suffice and optimise the process. This way, the same bunch of experts, who are no more tied to a particular vessel, can be shuffled to manage multiple ships in a fleet as, when and where their specialised skill sets are required.

This will not only cut costs and ease operations but also help tackle any plausible crew shortages. Having niche specialisations among operators will also make training easier and faster. “Instead of spending ten years to obtain multiple licenses and certifications to operate one vessel, a person can operate multiple vessels on a particular stretch with a specialised but much shorter training,” says Bußhoff. 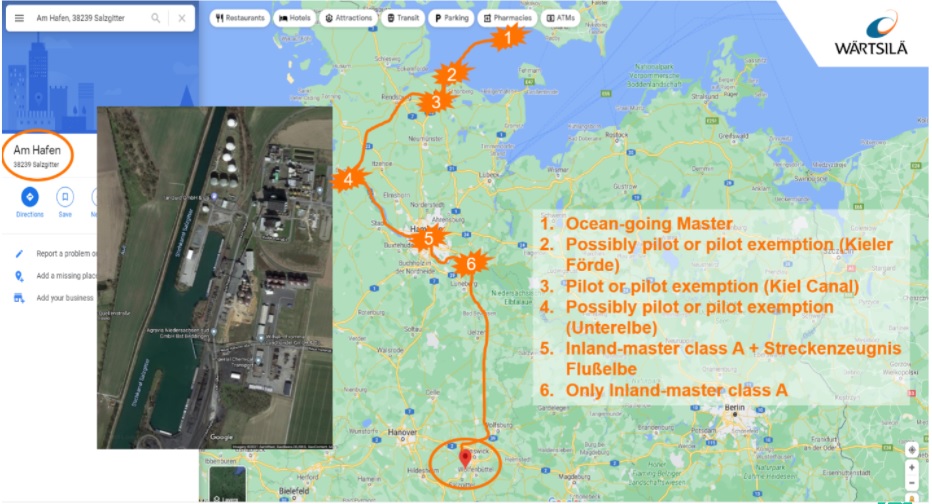 Image: To complete this short journey between Nakskov, Denmark and Salzgitter, Germany, it requires 6 different operator qualifications as well as expert knowledge of the German language.

Shipping is full of such examples where we're expected to have modern automation work around rather ancient rules, which merely exist because “things have always been done that way”. They were the smart solutions in their age and time, but technology has advanced by leaps and bound since. And there are much more intelligent, precise and safer systems to take care of the same functions. But we have not bothered to get rid of some of these archaic rules and replace them with something more contemporary.

The sea is an unforgiving medium where safety always comes first. Bad weather, wind and waves make for a dangerous environment that challenges the ingenuity of engineers, designers, and navigators. That won’t change when the balance between humans and technology shifts in favour of technology. Plus, as the push for decarbonisation becomes a dominant driver, the introduction of new technologies will bring new ways of working and demand a new mindset from everyone involved in shipping.

But before we start building ships with new technology, maybe, it’s time to re-evaluate a bit, think which regulations and guidelines are still relevant and make sense, and which ones have become outdated.

The answer is not to simply keep adding new regulations, but also to analyse the old rules and their fundamentals – ask why they exist in the first place, and then implement intelligently – revise where needed, and get rid of the unnecessary.

After all, regulations are not a checklist with ticks alongside. They are the most logical measures taken to govern the most rudimentary principle of the maritime industry – ensuring safety at all times.

Technology has always supported seasoned mariners in their pursuit of making the oceans safer and easier to navigate. Digitalisation and cloud-tech...

Safeguarding the skills of the seafarer

As shipping becomes increasingly technology-driven, marginalising the capabilities of highly trained seafarers would be the greatest human error of...

Wärtsilä Voyage’s integrated navigation control product range offers maximum usability, scalability, and networking, with a single hardware and software platform and a broad portfolio applicable to all types and sizes of vessels. This ranges from highly sophisticated integrated systems to standard navigation systems of any size, or individual products for retrofit applications.