The digital age has brought unprecedented connectivity to global transport and logistics. The revolution in consumer logistics spurred by aggressive online retailers such as Amazon has its counterpart in corporate logistics too, as companies along the supply chain look to work more efficiently and, critically, more efficiently together.

While the logistics process has often been described as a chain starting at the factory door and ending with the customer, at certain points an ecosystem approach is needed, linking multiple supporting companies rather than just connecting a series of companies in binary relationships. Ports are one example.

“A port is a self-organised ecosystem within a global logistics and supply chain,” explains Dmitry Rostopshin, General Manager, Ship Traffic Control and Management Solutions, Wärtsilä Voyage. “It involves thousands of companies and individuals, interdependent on each other’s decisions and actions to run their businesses smart.”

According to Rostopshin, several trends are emerging that are driving ports and port stakeholders to adopt a smart, connected approach to their business. The first is a shift in the traditional focus of the port authority.

Efficiency and organisation will be critical as traffic at ports increases. According to the Organization for Economic Cooperation and Development, container traffic related to international trade will nearly double between 2016 and 2030, growing by 73%. By 2050, traffic will be nearly three times the volumes of today.

According to a report by management consultant McKinsey in 2018, more than 20 ports had installed equipment to automate at least some of their processes in the previous six years. The process is accelerating; eighty percent of respondents to the McKinsey survey believed that most new ports would be at least semi-automated between 2018 and 2023. Authorities are also expected to begin planning automation retrofits in existing port facilities, bringing new efficiency even to older terminals.

Little wonder then that demand for port management software is booming. According to innovation and research consultant Thetius the global market, already valued at US$2.9 billion, is set to grow 7.5% annually to 2025.

In its Smart Ports Vision 2021, Wärtsilä Voyage advocates an ecosystem approach to developing digital solutions for ports. The notion of a ‘smart port’ refers to a port that uses digital solutions to overcome some of the traditional challenges associated with the sector, including spatial constraints, pressure on productivity, fiscal limitations, safety and security risks and sustainability.

The ecosystem approach described in Wärtsilä’s strategy will support port developments for a whole range of functions, services and connectivity enhancements. These will go beyond the domain of pure port operations like cargo management to areas where close cooperation is needed between ports and ship operators. The charging of hybrid systems, remote navigation, autodocking and port-ship data sharing platforms are just a few areas with exciting possibilities.

Rostopshin explains that these developments are already happening through Wärtsilä’s just-in-time (JIT) and sea traffic management (STM) solutions. Wärtsilä Voyage’s Navi-Port platform, launched in February, connects a ship navigation system to the port. Wärtsilä has been one of the main contributors to Sea Traffic Management (STM) developments and trials. The methodology was developed by the Swedish Maritime Administration (SMA) MonaLisa project initiated by the European Commission. Wärtsilä used the standards and approach developed during that project in Navi-Port, coupling it with open formats to encourage more ships and ports to use. 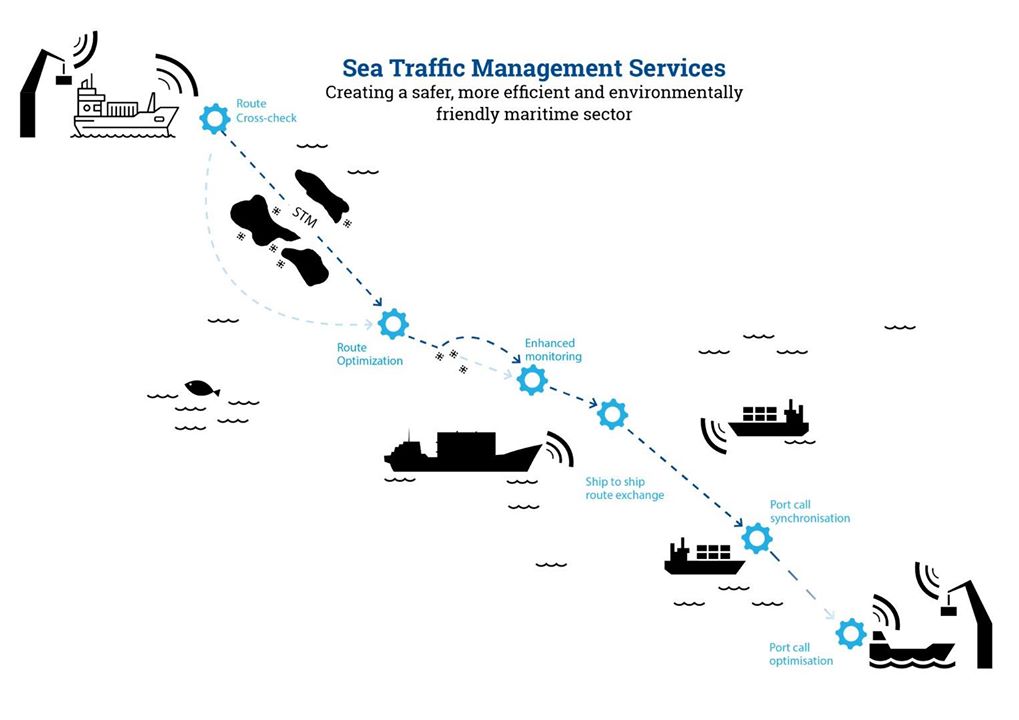 At that time, Port of Hamburg was running a data exchange pilot project with two Aida cruise ships and requested to install the solution onboard. Wärtsilä also provided Navi-Port solution for Hamburg Vessel Coordination Center (HVCC) responsible for communication between the port community system and the ships.

The port is now looking to add more ships to the project. Wärtsilä is working with shipping companies to develop the idea, as well as engaging other stakeholders such as pilots and towage operators to add critical mass.

It is a chicken and egg situation. Ship operators want more ports and ports want more ships in the project.

Holistic solutions like this increase port functionality and Wärtsilä is already looking into longer term developments. Navi-Port will be updated in 2021 with more analytics for aspects of safety and route exchange.

Navi-Port is just one element in enabling just-in-time arrivals. The next was to improve the functionality for digital communications between ports and ships. Such improvements will make communicating crucial information about arrival times and other data easier. 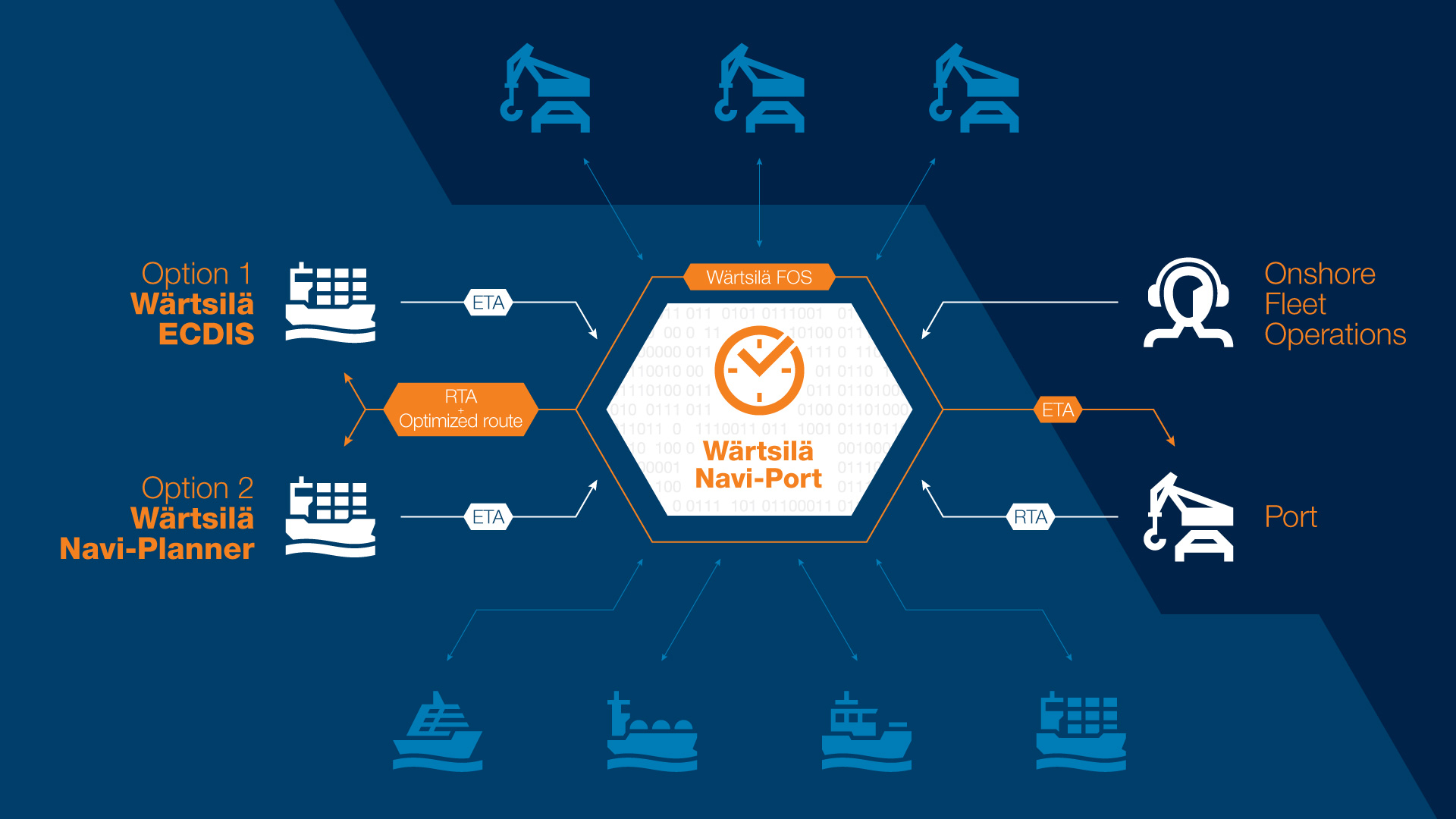 “STM was a validation project and a proof of concept,” says Rostopshin. “We decided to look into real use cases and use JIT arrival to benefit ports and ship operators. It needed to be easy to implement and simple to use for ship-shore communications.”

Wärtsilä developed applications connecting STM systems with integrated ECDIS. It then conducted tests with pilots and ship captains simulating standard approaches to ports with and without e-navigation. The result of the improved digital communications was a 60-70% reduction in VHF (Voice communication) between ships and ports.

“Today we are integrating STM principles into VTS for better ship-to-shore communications,” says Rostopshin. “This can also reduce millions of emails, faxes, and calls. We foresee a new generation of VTS and this is already happening in our VTS projects in St Petersburg, Russia, Rijeka, Croatia and Varna, Bulgaria.”

The consortium is taking its first step towards industrialisation with its first users, three EU-projects, where SMA is responsible for the infrastructure solution. The projects, all based on the STM concept, will use the Navelink exchange to authenticate users and identify operational services.

This is an example of a new kind of cross industry collaboration where the industry interacts with public organisations and brings together forces to accelerate digitalisation in the maritime sector.

The accelerating digitalisation of ports has many advantages for port authorities, ship owners, shippers and other stakeholders. Greater visibility across the logistics chain will improve efficiency, which in turn will reduce energy consumption for transport as a whole. And in the process ports may ease some of their perennial challenges around space, productivity and finances. For the ports smart enough to seize these opportunities, a new digital era is dawning.

Wärtsilä’s SMART Ports Vision 2021 and beyond