Wärtsilä has helped improve the efficiency and safety of maritime transport on the Black Sea through the completion of the fourth phase of Bulgaria’s integrated vessel traffic management information system (VTMIS).

The multiphase project is designed to manage vessel traffic within Bulgarian ports and waterways and enhance information services for maritime transport.

VTMIS acts as a traffic management system, ensuring safe and efficient passage of vessels in and out of port. Operators also provide navigational assistance by giving the captain information about potential dangers such as shallow waters and hidden rocks.

The system also facilitates the exchange of data, so information about any ship heading to port – such as cargo or vessel type – can be easily distributed to relevant authorities, ship owners or agents, or other groups, such as cleaning services.

The goals of the phase four construction efforts were to upgrade and increase these capabilities by expanding the geographical spread of the system and improving the telecommunication infrastructure. These, in turn, will improve efficiency and security of shipping in Bulgarian waters, as well as likely increase competitiveness of the country’s ports. 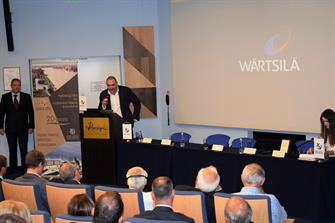 Wärtsilä was recognised at a conference marking 20 years of Vessel Traffic Services in Bulgaria.

VTMIS consists of sensors on 35 remote sites along Bulgaria’s coast and control centres at two ports that are vital to shipping in the trans-European transport network. One is at Port Burgas, the main port on the Black Sea, which operates gate traffic between Europe and Turkey. The other is at Port Varna, which oversees the northern part of the Black Sea.

The sensors are key to the system’s success, and the most important of these is radar: “the same as you see in an airport, turning on a tower,” explains Leontiev. The radar provides real-time data about all objects on the marine surface.

Meanwhile, automatic identification system (AIS) shore stations receive data from International Maritime Organization (IMO)-mandated transponders on vessels. This allows VTMIS operators to receive static data about the ship – such as tonnage, size and type of cargo – as well as dynamic data – like course, speed and coordinates.

Voice communication radios, which act a like a car radio, allow the shore to communicate with the captain and crew on board a vessel, while video cameras along the coast enable operators to make visual identification of a vessel for up to 10 nautical miles.

Operators using hi-tech workstations can then collate and analyse the data from all of these sensors at a central control centre in order to provide a vessel with navigational assistance, communicate with its captain, and assist with other services.

“The system is like a mixture between a vessel traffic management system and coastal surveillance system,” says Leontiev. The Bulgaria Ports Infrastructure Company and Ministry of Transport are responsible for all maritime traffic in the country’s territorial waters, so this information can also be passed to external services such as the coastguard, maritime police or search and rescue services.

During the implementation phase of the project, it was also agreed with the client to provide a station compliant with Wärtsilä’s Sea Traffic Management (STM) concept, a technology platform that allows for online route exchange between vessels and the shore.

“A ship travelling from Australia to Varna, for example, can send its voyage plan to the port and the port will see when this vessel will arrive and see its route on a map, in order to predict estimated time of arrival,” Leontiev explains. “This port can then share this route with other ports.”

A key benefit of using Wärtsilä, which originally worked with the client through its Transas business unit, is that the company uses the latest technology on the market in terms of software and IT infrastructure, according to Leontiev.

“But what is even more important is that Wärtsilä products are in strict compliance with international regulations from bodies like the IMO and IALA [International Association of Marine Aids to Navigation and Lighthouse Authorities].”

The benefits of the latest VTIMS upgrade are therefore multi-fold. As well as improving navigational assistance, the expansion of the coverage area and the sophisticated processing algorithms – which can detect very small targets in operational systems – enable operators to make early warnings when required, thereby significantly improving safety.

VTIMS also acts as a single window for information exchange between different maritime organisations. This allows for easy transfer of MARPOL emission declarations, for example, and means that if a ship with dangerous cargo is detected, such information will be automatically available for the respective services and agencies required.

Greater efficiency also has environmental benefits for both the region and the wider trans-European transport network. “Having such a system means a vessel spends less time on a waiting list to get into port, which means they put less oil into the sea,” says Leontiev.

Given Bulgaria’s strategic position on the Black Sea, these benefits look set not just to impact the ports themselves, but also the trans-European transport network as a whole.