Company
Home
Insights
The only way is ahead

The only way is ahead

Challenges are merely exciting opportunities to Birgit Liodden, Director of Nor-Shipping. She is one of the most provocative and influential voices calling for the maritime industry to embrace change in preparation for the future.

Challenges are merely exciting opportunities to Birgit Liodden, Director of Nor-Shipping. She is one of the most provocative and influential voices calling for the maritime industry to embrace change in preparation for the future.

“At Nor-Shipping, we witnessed how big players in the industry have gone from talking about change, to actually doing it,” says Birgit Liodden enthusiastically, leaning back in a brown leather armchair at a downtown Oslo coffee shop.

“It is important that large companies like Wärtsilä take the lead, and develop products and services that challenge the industry to go forward,” she adds.

The dark suit from a few days ago has been exchanged for casual jeans, as her ‘tour the force’ has come to an end; the 2017 Nor-Shipping trade fair, attracting 31,500 delegates and almost 1000 exhibitors from 31 May to 2 June.

The 35-year-old director of one of the main global platforms for stakeholders in the maritime industry, has a bubbly personality that makes you want to follow her lead – and change the world. It is no surprise then that the industry embraced the 2017 Nor-Shipping event theme of ‘Disruptive Sustainability’ - her brainchild.

“The industry is in the midst of a paradigm shift, facing a new digital reality, a need for new business models as well as increased focus on clean energy. The shipping industry cannot sit around and wait for these shifts to disrupt the business. We need to change from within and be disruptive ourselves to develop a financially and environmentally sustainable industry,” she says.

Liodden, who was born (and lives) in the Norwegian capital of Oslo, is often portrayed as someone who dares to question established industry beliefs and practices.

“I don’t believe I speak against the industry. Rather, I speak up! I love shipping and want the industry to become even stronger, and to be perceived as offering some of the most awesome career opportunities on the planet. But I do challenge people,” she says, admitting to frequently calling for bolder industry leaders, cooperation across sectors and outside-the-box thinking. 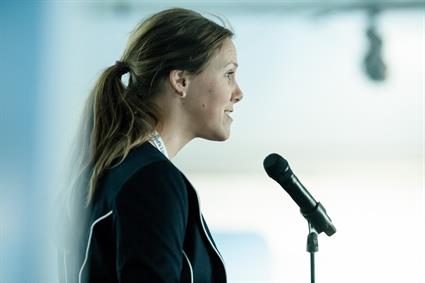 She ponders a bit before answering how she has managed to make such a mark in the industry:

“Shipping may be a conservative industry, but my experience is also that it lets people flourish. I have no fear of authorities. I speak without any filter. I am also passionate. Perhaps that is why I am listened to?” she asks rhetorically.

In 2012, she received the Women’s International Shipping & Trading Association (WISTA) Leadership Award for her work to inspire young women to pursue careers in the maritime sector – one of several awards on her mantelpiece.

She is frequently asked to speak or be a panellist at events, within and outside the maritime industry. She not only sits on numerous boards but has also been part of the jury at several maritime awards. In her free time, she volunteers at industry and sea-related organisations.

“I do not intentionally make people angry, but it is bound to happen when a relatively young woman like me pokes her finger at sore spots in the industry,” she laughs, recalling red faced industry leaders – during a debate on attracting new talent – thundering in response to her idea, that internet access on board ships is important if we want young people to join the commercial fleets.

One of her goals is to make the shipping industry more visible, particularly to the young:

“Traditionally, shipping has been a bit off the radar, even in a big shipping nation like Norway. Young people tend to think most of their consumer goods is transported by plane, but the fact is that 90% of all goods is being shipped,” Liodden says.

She used to be one, herself: “I actually quit school at 16, and went working on a farm, before working in the estate business. I had no intention of going into shipping, and frankly, people had low expectations on my behalf. But I have always been headstrong and done what I believe in,” she says.

At the age of 23, she jumped at the chance to become an administrative assistant in Wilh. Wilhelmsen. Eventually, she worked her way up to become a Global Project Manager.

She has since not looked back. In 2011, she started her own consultancy business, working for clients such as Sea Trucks in Nigeria, Nor-Shipping, and the OECD, where she was an adviser on the 2012-2013 “Future of Port Cities” project. She also set up the global YoungShip network, promoting young maritime professionals. In 2015, she left her own consultancy business to become the director at Nor-Shipping.

Birgit Liodden is known to be particularly passionate about environmental issues – within the shipping industry and in society at large. And she is not afraid to show it. She has taken part in demonstrations, for instance against oil drilling in the Arctic, has signed numerous petitions, and was the first private citizen in Norway to purchase a zero emission hydrogen car.

“I try to teach my two children how to be responsible, and take the boys to things like beach clean up initiatives,” she says.

Liodden was recently appointed to the board of the Bellona Foundation, one of Norway’s most vocal environmental NGOs. “I plan to challenge them too,” she laughs, adding that engaging business is key to achieving real results.

“It is not just a question of how the shipping industry can become greener, but finding ways that the industry can contribute to a more sustainable future – identifying new business opportunities in the process,” she says, leaning eagerly forward as she presents her ideas, such as floating installations that deal with garbage disposal or produce energy, cultivate food or produce drinking water to growing urban populations, and thus alleviate the shortage of land and fresh water.

“Really, it is only our minds that limit us.”