Shift business festival faced AI and algorithms in all its glory

AI and algorithms are challenging for all businesses as they can bring the joys of progression, but also the dilemmas of the unknown. Mathematician Cathy O'Neil wants corporations to pay attention to the ethics and legality of using algorithms and behind-the-scenes profiling of clients and consumers. She was one of the speakers at Shift festival.

The venue for Shift business festival, this year, was the old Kakola jail in the heart of Turku, Finland. While its narrow corridors and vibrant courtyards brought about four thousand people together, the booths built in the old cells got people talking.

“The goal was to bring together developers and users, and industrial and technological operators. And the venue is a great icebreaker that creates conversations. That is why we chose it. We wanted it to be memorable,” said Alexander Törnroth, the CEO of Shift.

The topics discussed played a key role in keeping the audience gripped. Many of the sessions revolved around artificial intelligence (AI) and algorithms.

One of the most interesting speakers on the main stage was mathematician and the author of Weapons of Math Destruction Cathy O’Neil. Her research shed light on the bad use and questionable ethics of algorithms and brought to the fore behind-the-scenes profiling of clients and consumers.

“Algorithms have become more and more abrasive. They are used in very important decisions related to jobs and insurances. People can’t read them or make complaints about them and for that reason they are unfair,” O’Neil said.

Due to algorithms and the scores they tally, people can be discriminated based on their age, sex, sexuality or for anything from their past.

O’Neil’s goal is to start auditing algorithms. She feels that is the only way to make sure they are transparent enough to be legal and bring more value to the companies.

“Companies want the public and their investors to trust them and their algorithms. Auditing is the way to test and show people that algorithms are used in a legal and fair way.”

In the US, legal cases due to discrimination caused by algorithms are already a reality. O’Neil hopes governments take action to oversee and supervise the use of algorithms before the legal problems explode.

“There should be a federal bureau for algorithms, that bring together legal experts and people who really know how algorithms work.”

As technology develops by leaps and bounds, the actions to supervise algorithms or AI need to happen fast too.

“Algorithms are not going to go away. They are everywhere, and they will be everywhere. Now we need to question them. Is it good? Is it legal? Is it fair? Does it discriminate? If someone tells you that they have an algorithm, always ask if it is legal,” O’Neil suggested. 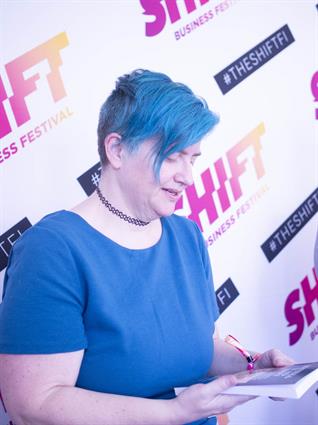 Cathy O’Neil sees algorithms to be unfair because they are not open information to the public. She is seeking federal monitoring and auditing of algorithms.

Maritime companies are keen on finding the most innovative and profitable ways to use new technology in their field. This was more than evident at the industry session which focused on maritime as its main topic, and included presentations on AI and the next generation data. Five hours of inspirational speeches and discussions gathered a good crowd.

“The day opened with many points of view on AI and new technology. One thing everyone agreed on was being able to build a sustainable ecosystem together with the help of technology,” said Toby White, Wärtsilä’s vice president of digital engineering.

White was one of the speakers on next generation data in the maritime sector.

“There is a lot of interest in AI and a lot of experiments and tests are being done, but everyone is in a learning phase. We are a long way from being able to say that we fully understand the implications of this technology,” he added.

All the speakers on the maritime stage unanimously agreed that there is still a need to figure out how to incorporate technology and AI into marine industry. While some experiments have been successful, in many cases the outcomes have been unclear. That said, there was mutual consensus among all speakers about one thing; latest technological inventions will have a major role in how the marine industry changes and develops in the future.