LPG – Taking fuel flexibility to the next level

While the first Wärtsilä LPG power plant has been in operation for some time now, a solution offering liquefied petroleum gas (LPG) with diesel as a backup fuel is the latest development in Wärtsilä’s fuel flexibility offering.

While the first Wärtsilä LPG power plant has been in operation for some time now, a solution offering liquefied petroleum gas (LPG) with diesel as a backup fuel is the latest development in Wärtsilä’s fuel flexibility offering.

With some recent key installations in power plants across Central America and the Caribbean, Wärtsilä proves once again that its engine portfolio has the versatility to run on a variety of different fuels suiting both the needs of its customers and a challenging energy market.

In early 2016, the first of several LPG-powered power plants with Wärtsilä technology went into operation in Central America. A second plant on Roatan Island, Honduras, soon followed. Another plant is due to start operations in St. Thomas in the US Virgin Islands in late 2018.

LPG has its advantages. For instance, while liquefied natural gas (LNG) requires special shipping terminals and cryogenic storage solutions, LPG’s primary advantage is its easy accessibility in world markets. It is a global and easily tradeable commodity. In many parts of the world, LPG is used for transportation, cooking and heating. In addition, LPG is also more environment-friendly than heavy fuel oil (HFO).

Today, the lion’s share of LPG is sourced from the US, where it is a byproduct of the shale gas exploration bonanza, and from the Middle East. The US supply makes LPG especially attractive in the Caribbean and Central America, hence Wärtsilä’s recent LPG plant orders in the region.

This trend is supported by the World LPG Association 2017 market report, which points out how small countries and island nations without access to gas could be a future niche for LPG-fuelled power plants, and describes how LPG will have an increasingly important role to play in the world’s energy production.

There is growing evidence to suggest that LPG will have an important role to play within the global Power Generation sector in the next 10 to 20 years. As the trend towards renewables continues throughout many parts of the world, and with coal increasingly seen as a power generation source of the past rather than the future, the role of gaseous fuels as a lower-carbon, flexible way to generate electricity has never been more important.

The International Energy Agency (IEA) anticipates 50% growth in the demand for liquefied natural gas (LNG) in the period 2016 to 2040, with much of this growth associated with electricity generation, and a continuation of the trend away from using coal-fired power plants.

Where pipeline infrastructure exists in close proximity to the demand, natural gas is clearly the gaseous fuel of choice. However, many countries do not have an established network of natural gas pipelines. In countries where these do exist, infrastructure is often reserved for areas of high population density or centres of industrial activity, leaving more remote areas with little or no access to natural gas. In such cases, there is a clear opportunity for LPG to provide a solution for power generation – especially when new power plants are necessary to meet increasing electricity demand.

In some cases, governments are looking at using LPG as a ‘bridging’ fuel in newly built power plants – often with short one-to two-year lead times – but with a longer-term plan to convert to natural gas once the pipeline infrastructure is in place.

The first Wärtsilä LPG power plant entered service in Central America in early 2016 and it generates baseload power for industry. 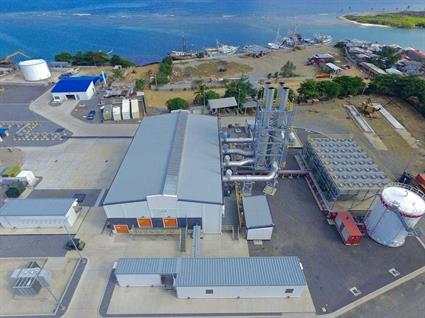 Roatan Electric Company (RECO) provides electricity to the island of Roatan in the Caribbean side of Honduras using their new 28 MW LPG-fired power plant, which was built by Wärtsilä under a fast-track EPC contract in 2016. Wärtsilä’s modularised plant design allows for fast track construction. Photo: Roatan Electric Company

The 2017 report continues: “In the future, there is also likely to be an emerging opportunity associated with the use of LPG Power Generation in combination with renewables such as solar PV (photovoltaics) and wind power. These ‘hybrid’ (or micro-grid) projects are likely to be particularly well-suited to remote, or island, locations which currently rely on expensive diesel to meet their power needs.”

Wärtsilä’s new vision is to lead the world to a 100% renewable energy future. Integration of renewables is a key element of this ambitious vision. This integration requires fast-acting, flexible and efficient backup generation. Wärtsilä’s combustion engine technology is superior for this purpose, and a number of peak and grid stability plants have been delivered across the world to facilitate the exploitation of wind and solar power. The US has been the forerunner in efficient renewables integration, where the largest US peak and grid stability plants with Wärtsilä’s technology have capacities in excess of 200 MW. Wärtsilä’s flexible power generation capacity is a solid foundation for future expansion of renewables. 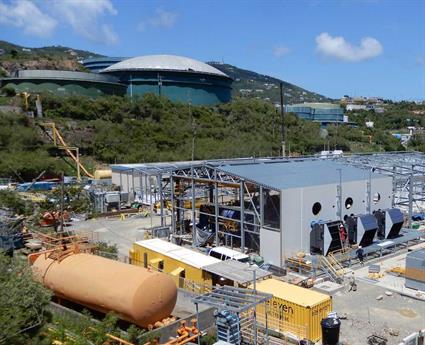 The construction of a 21 MW LPG power plant for US Virgin Islands’ Water and Power Authority is well on its way and is foreseen to be completed in December 2018. Wärtsilä is building the power plant on EPC terms.

With these market conditions, Wärtsilä now has two technologies in its portfolio that have the ability to burn LPG gas. Both technologies are based on the proven Wärtsilä 32/34 frame, launched in the mid-1990s, of which close to 5000 units are already in service in power plants worldwide. In each case, the engine frame and combustion engine technology is the same but the fuel supply system on the 32LG provides new innovations.

The preferred fuel flexibility (natural gas or liquid fuel) in addition to LPG and the composition of the available LPG influences the choice of engine technology for an LPG power plant.

In addition to LPG, the Wärtsilä 32LG engine can burn a wide range of liquid fuels between LFO, kerosene, naphtha and condensates. The engine automatically adjusts itself to changes in the fuel supply as controlled by the operator. Besides using LFO as back-up fuel for LPG, the LG engine fuel flexibility also opens up interesting options for optimising fuel costs in changing fuel markets.

The fuel supply and injection system of the Wärtsilä 32LG engine is the real innovation. Although the 32LG system builds on cylinder-specific electronic control and common rail technology developed and further refined by Wärtsilä during the last 25 years, coping with the properties of the wide fuel range of the Wärtsilä 32LG required precision engineering and testing.

In addition to the undisputed flexibility of Wärtsilä’s combustion engine plants, the ability to maintain performance with only marginal derating in hot, high and dry sites typical of deserts and high mountains distinguishes Wärtsilä’s plants from gas turbine technology. By contrast, other power generation technologies may lose in excess of 30% of the rated capacity due to high ambient temperatures and high altitudes. Furthermore, due to the closed cooling system of Wärtsilä combustion engine plants, water consumption is marginal. Additionally, Wärtsilä combustion engines do not require water for power augmentation at high ambient temperatures or NOx reduction.

When engaging Wärtsilä as an EPC contractor and/or to manage the power plant, plant owners can focus on further optimising and developing their business.