Natural gas-fired power plants are the most responsive and flexible power generating assets in electricity markets. Natural gas power plants are dispatchable and can adjust load daily, ramping up and down with demand and balancing the intermittent production of renewable energy sources. For short duration pulse load needed to balance solar and wind output, gas turbines are not profitable. Wärtsilä combustion engine power plants offer significant advantages over gas turbines, with higher pulse load efficiency and the capability to provide ultra-flexible and cost-efficient output.
Gas power plants are often ramped up and down, or cycled, in response to changes in demand and load. The time required to ramp up and down, efficiency at part load and overall duration or plant output determine the fuel consumption and economic performance of the power plant. Unlike baseload plants that operate continuously, flexible power plants can provide short-duration load, or pulse load. Pulsed loads are produced in response to the sudden loss of a power generator, reduced output from wind and solar sources, or spikes in demand. Pulse generation improves reliability and power quality by stabilizing the electric grid.
An assessment by the California Independent System Operator (CAISO) demonstrated the need for significant pulse generation over two hours during the morning peak (8,000 MW) and the end of the work day (13,500 MW) to meet demand when solar and wind are not producing , as shown in Figure 1. This challenge is not unique to California. Many countries are adopting energy policies supporting a transition towards 100% renewable electricity production. 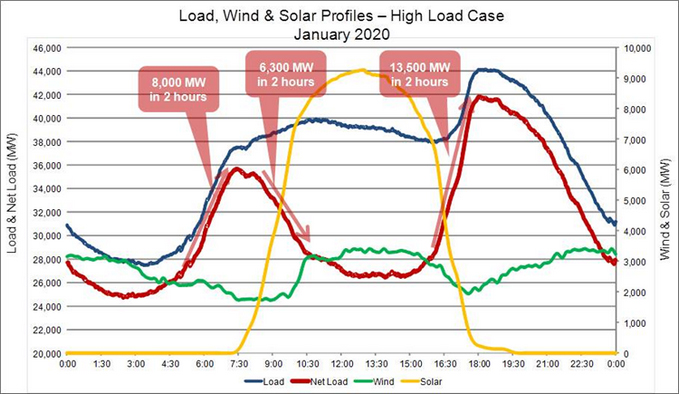 Power plant owners want to optimize operation to minimize fuel consumption and maximize revenue. The startup time, time to ramp up output to full load, operating at a minimum load, and the efficiency at part load determine the amount of fuel consumed (energy input) and the length of time the plant operates each day. By producing output during peak demand times, the power plant earns revenue from high electric tariffs. Ramping up and down should be as fast as possible without risking damage to the power plant equipment.

Typically, a load following CCGT ramps up slowly during early morning hours, operates at full load during morning peak demand, curtails output during midday hours to a minimum operating load at which hot conditions are maintained (40 to 50 percent of full load), then ramps back up again to full load for the evening peak. The plant is shut down at night and then ramped up again in the early morning hours the next day. This double pulse load profile, also called “two-shifting” or “two-cycling” for a typical CCGT compared with a Wärtsilä Flexicycle™ combustion engine power plant is shown in Figure 2. The duration of each pulse is 4 hours, with a curtailment in between pulses of 2 hours (4–2–4 pulse production). The shaded area in Figure 2 shows when the power plant would be receiving revenue from pulse production.

As can be seen in Figure 2, the startup time and the minimum operating load increase the total time the CCGT plant is operating – and thus its overall energy (fuel) consumption and operating expenses. While a typical CCGT requires about 60 minutes to reach full load in the morning, a Wärtsilä power plant start within a few minutes.

As discussed above, the efficiency of a plant producing pulse loads can be dramatically different than the efficiency at baseload. The pulse efficiency is the net efficiency for the duration of the operating period, including startup, shutdown and part load operation. Combustion engines can reach full load and curtail output to zero within minutes. In addition, because they are based on modular architecture, Wärtsilä power plants can operate at part load by running only a subset of the engines at full load and maintain full efficiency.

The efficiency of gas turbine power plants however degrades at part load. Gas turbines reduce power output by reducing the flow through the turbine, which also reduces the combustion temperature and thus efficiency. Frequent starts and stops will further reduce the overall pulse efficiency of CCGTs. The impact of cycling on efficiency is seen in Figure 6. While the CCGT has higher efficiency during baseload operation at full output, the Flexicycle plant achieves higher overall efficiency for all pulses less than 8 hours long. Impacts of pulse operation on CCGT efficiency is most pronounced for pulse duration of two hours or less. Wärtsilä power plants are efficient and economic over a wide range of pulsed loads, providing ultra-flexible capacity for meeting the challenges of renewables integration and changing demand.

There may be several types of pulse load output that a power plant produces over the course of a year including one-hour, two-hour, four-hour, and eight-hour single pulses, as well as 2–2–2 pulse operation. Shorter pulses and more cycling decrease the efficiency of CCGTs and increase the amount of energy input (fuel) per MWh of electricity produced. This impacts the plant’s profitability by increasing operating and fuel costs. Figure 5 illustrates the disparity in income per pulse for a 200 MW Flexicycle power plant compared with a CCGT of similar size for the most common pulse outputs. While the Wärtsilä power plant is profitable for any pulse duration or cycling, a CCGT plant is not profitable for short duration pulse operation.

The cash flow for 4–2–4 pulse production is shown in Figure 4 for a 200 MW plant. The cash flow projection takes into account startup costs, fuel costs, and O&M costs given in Table 1. The shaded area indicates negative cash flow – the power plant is costing more money to operate than revenue earned. As can be seen in Figure 4, a CCGT does not become profitable until the end of the second four-hour pulse. The decline in cash flow after the first pulse is because the gas turbine continues to run at the minimum hold point and burn fuel less efficiently until it ramps back up again for the second pulse during the evening peak.

The cumulative energy input of a 200 MW Wärtsilä power plant compared with a similarly sized CCGT for two-shifting operation (4–2–4 pulse production) is shown in Figure 3. The amount of energy input is a function of the efficiency of the power plant and the total operating time. The rapid Wärtsilä start eliminates the need for a load hold point to maintain hot conditions, reducing the overall operating time. This in turn reduces the amount of energy (fuel) input to generate revenue-producing load. The cumulative energy input of a Flexicycle plant is five percent less than a CCGT over the same operating period.