How does a combustion engine work?

The SG engine is based on the Otto cycle and uses a spark plug to ignite an air-fuel mixture injected at the top of a cylinder. In the Otto cycle, the fuel mixture does not get hot enough to burn without a spark, which differentiates it from the Diesel cycle. In diesel engines, air is compressed until the temperature rises to the auto-ignition temperature of the fuel. As the fuel is injected into the cylinder, it immediately combusts with the hot compressed air and expanding combustion gases push the piston to the bottom of the cylinder.

Each movement of the piston within a cylinder is called a stroke. Reciprocating IC engines are described by the number of strokes to complete one power cycle and the speed of crankshaft (expressed in revolutions per minute, rpm). For electric power generation, four-stroke engines are predominately used. During the intake stroke, the premixed air and fuel (SG engines) or air (diesel engines) is drawn into the cylinder as the piston moves down to “bottom dead center” position. During the compression stroke in SG engines, the air-fuel mixture is compressed by the piston and ignited by a spark from a plug. Auto-ignition in SG engines is prevented with proper limits on the compression ratio. 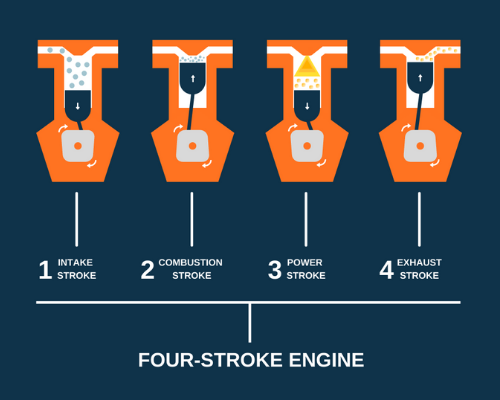 The size and power of a combustion engine is a function of the volume of fuel and air combusted. Thus, the size of the cylinder, the number of cylinders and the engine speed determine the amount of power the engine generates. By boosting the engine’s intake of air using a blower or compressor – called supercharging – the power output of the engine can be increased. A commonly used supercharger is a turbocharger, which uses a small turbine in the exhaust gas path to extract energy for driving a centrifugal compressor.

Combustion engines can burn a variety of fuels 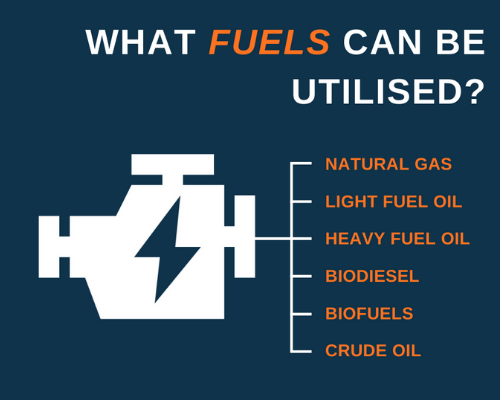 Combustion engines can burn a variety of fuels, including natural gas, light fuel oil, heavy fuel oil, biodiesel, biofuels, and crude oil. Diesel engines are generally more efficient than SG engines, but also produce more nitrogen oxides (NOx), sulfur dioxide (SO2), and particulate matter (PM). SO2 and PM formation is a function of the fuel, with natural gas producing low emissions. The formation of NOx is coupled with combustion temperature. In SG engines, premixing of air with the fuel to produce “lean” conditions (more air than is needed for combustion) has the effect of lowering the combustion temperature and impeding NOx formation. New engine designs have been developed to take advantage of the diesel process while maintaining the benefits of lean burning. Dual-fuel (DF) engines are designed with the ability to burn both liquid and gaseous fuels. When operating in gas mode, the gaseous fuel is premixed with air, injected just after the compression stroke and ignited by a pilot fuel flame. In this process, the pilot fuel flame acts a “spark plug” to ignite the lean gas-air mixture. DF engines retain the ability to use a backup liquid fuel when gas supply is interrupted. 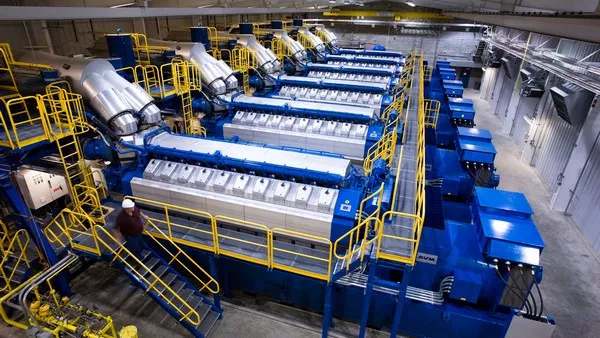